SHIT JUST GOT REAL. Not that it wasn’t real before, but I have now finally accepted that I could never survive in male jail. I’d still be the Pod Boss’s Executive Assistant in lady jail, tho.

This episode is all about Jeff Blart: Kohl’s Cop. As we all know, Pod C’s Ricky has been trading his meds for friendship and has now fallen into the abyss of insanity. According to Ricky, the television is telling him that Jeff is a child molester. Other inmates very casually try to tell Ricky, “Oh, that’s probably inaccurate” but Ricky is left to his own crazy devices and decides to go beat up Jeff. 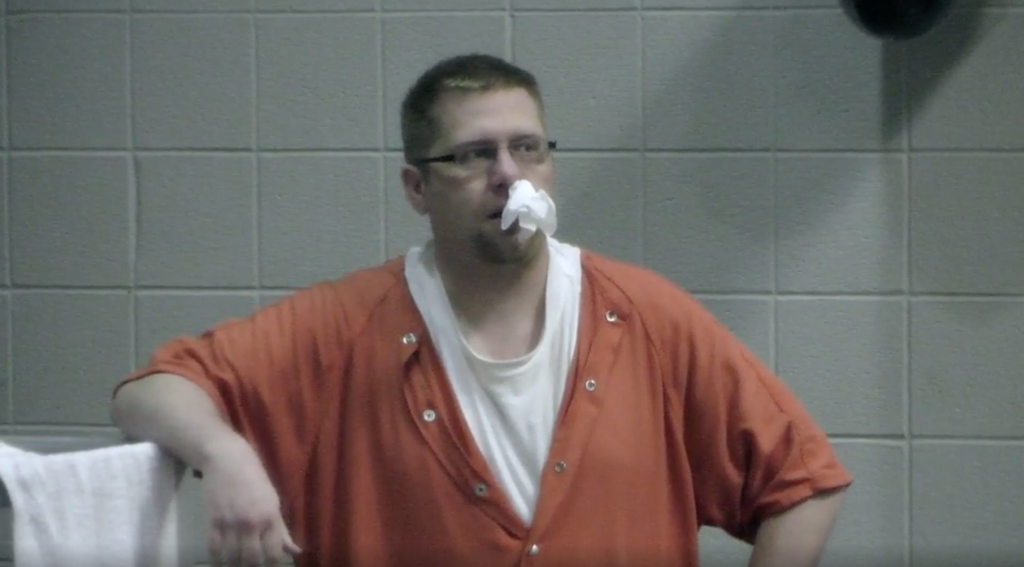 “You can’t appear to be weak in jail.”

Ricky runs over to Jeff’s bunk and “sucker punches” Jeff in the side of the head, knocking off Jeff’s glasses, without which Jeff is blind. By jail standards, this fight was like bumping into someone at Starbucks. By Jeff’s standards, he’s hanging onto to dear life with a needless tissue hanging out of one nostril, presumably to stop the blood that he’s praying will be visible.

No guards respond to the fight and everyone in Pod C denies it ever happened, much to my amusement.

Instead of using the “I really miss hot coffee” code phrase or putting a towel around his neck, Jeff heads to the phone banks to call his wife. HIS WHAT? Jeff has a wife? Jeff has known the touch of a woman? This is news to me. So basically Jeff needs his wife to tell the producers he wants out. The producer’s pull Jeff from Pod C, and as it’s Sunday night, must keep him overnight in solitary.

Robert has been basking in the glory of solitary confinement for 4 weeks and is LOVING IT! Jeff becomes borderline hysterical at the conditions of his own private jail suite, and notes that he has to “poop” but there’s a camera. It would appear Jeff has already forgotten about the toilet situation in Pod C where he had to beg to go to the bathroom from his fellow inmates. Go poo Jeff. No one wants to watch. 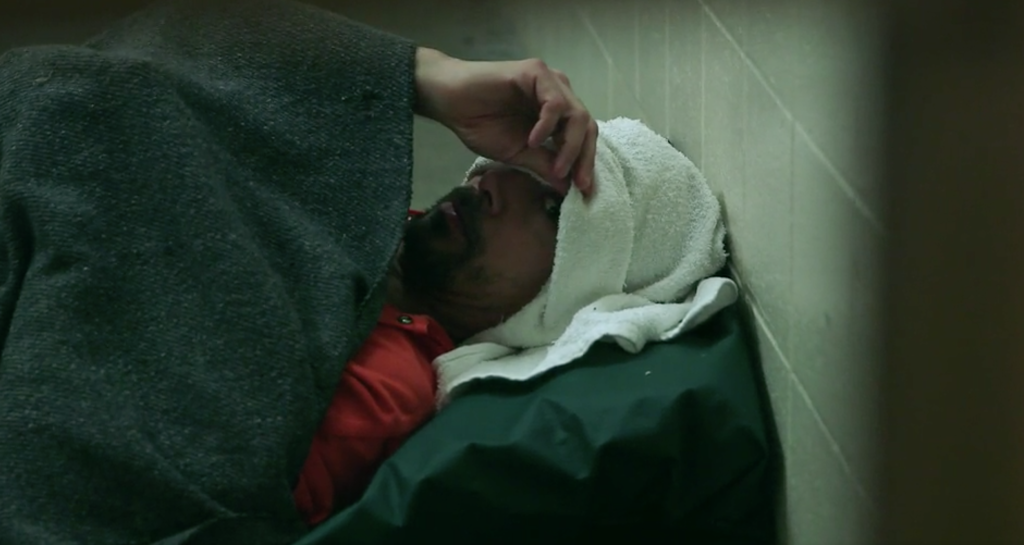 After 24 hours in Robert’s “meditation retreat”, Jeff is finally released into the free word and literally runs away from the jail. He made it less than a week, folks. The guy who wanted to become a jail guard wanted out before Mohamed Ali’s daughter.

Tami is still hanging on by a thread and by other inmate standards, in responsible for 50% of the drama in Pod F. That is a lot of drama for a non-criminal, actual police office to bring to jail. She affords every single jail interaction with the gravity of life and death. I would like to see Tami on a Real Housewives show, because her drama level is on par with a Lisa “Enraged” Rinna. Imagine Tami’s reactions to housewife drama. It’d be amazing, right?

Now that her bestie Sam is off to a year in rehab, Babar is desperate enough to befriend Tami again, which I suspect will be good for both of them. The real saving grace here is that Tami got a visit from her tall, sane wife Joelle, who is smart and lovely and normal and rational. Tami clearly had a fucked-up childhood and adolescence in foster care, but her beautiful, respectful partnership with Joelle is inspiring. God bless! 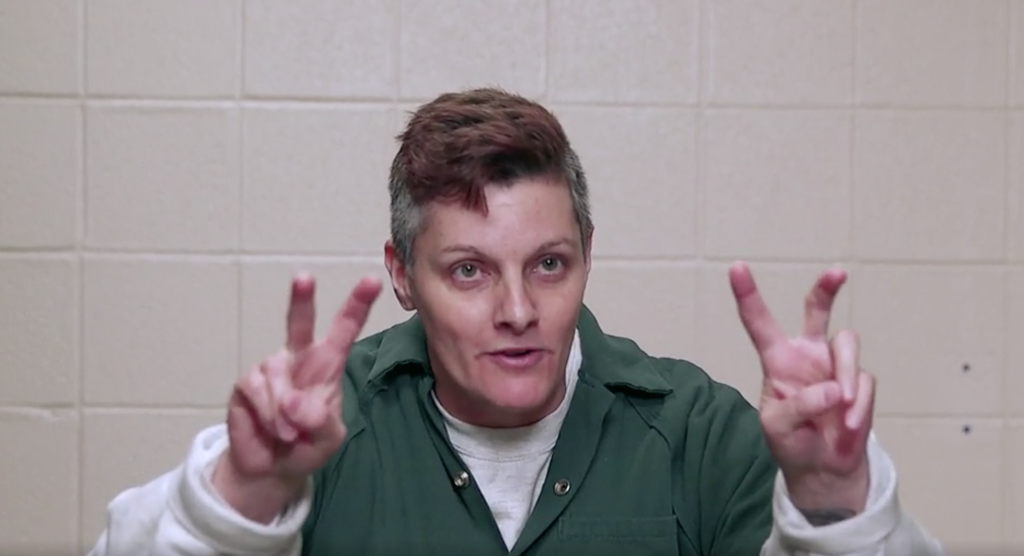 Every day is drama day for Officer Tami.

Babar is appalled that after Sam left, her “friends” went through Sam’s commissary to see what she left, rejoicing in various snacks and toiletries. I don’t regard enjoying someone’s leftovers as the betrayal that Babar does, but she’s so upset, Babar pulls the neck-towel “get me out of here” move. Unlike Jeff, however, unhappy military wife Babar just needed a break. She also needs to stop calling her husband to complain about voluntary jail.

Popular Zac and Isaiah are getting too comfortable in Pod C, so the guards move them to Pod D where it’s waaaaaaaay scarier. Both of them remark instantly that the energy feels extremely sinister. Without a ‘Tommy the Pod Boss’ keeping things relatively peaceful, Pod D has dissolved into a Lord of the Flies situation where even Zac the Marine is terrified.

The upside of Pod D is the presence of DiAundre, who we might remember from previous episodes and who some of you have found on Pinterest. In a twist to rival the end of “The Usual Suspects,” DiAundre is Pod D’s enforcer, attacking other inmates on command when deemed appropriate by “Sheckles”, who’s kinda like a Pod Boss without any interest in peace and order. Pod C’s Tommy might dramatically deny seeing any fights he totally just saw, but the guy can manage the shit out of the pod and make jail livable for the people he’s rooming with. Even the guards just come to Tommy to ask what’s up. No one expects a straight answer from “Sheckles.” They simply expect homemade cocaine.

Maryum continues to maintain her anonymity despite being the world’s most famous celebrity daughter. Next week, she appears to be concerned about some sort of “Contagion” situation. As for Robert, we see very little of him. Still in solitary, Robert is told he needs to return to the general population and might want to try and normal-up. Robert nods his crazy eyes at this impossible request.

What did I miss, my 60 Day Friends? And could you last in jail? Let’s discuss and until next time, may all of your commercial breaks be brief. 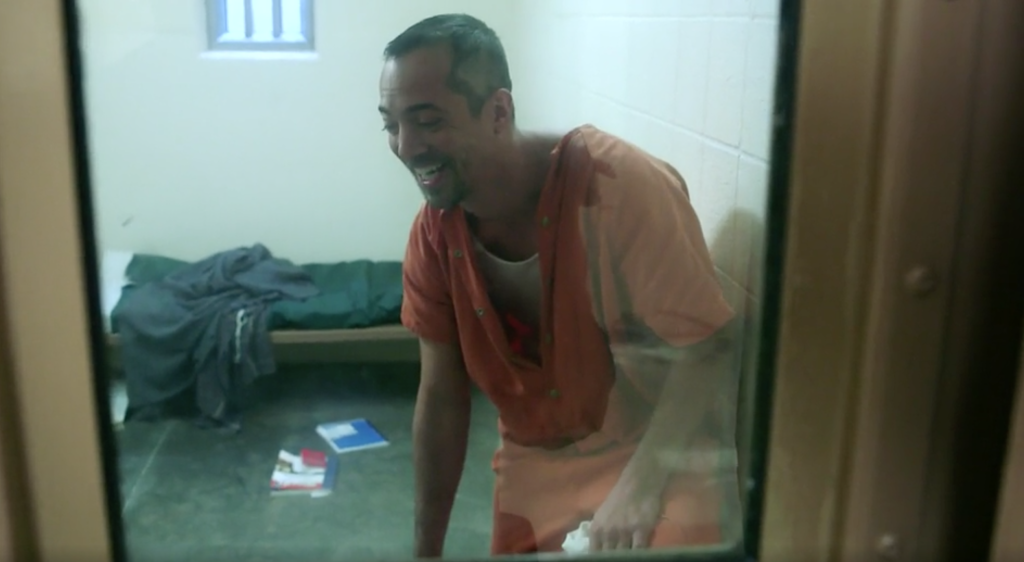 See you next week, guys!