On this week’s 60 Days In, a piece of printer paper with crayon hearts on it transformed Babar into one of those people who supports Kim Davis.

Here’s what happened in the biggest scandal to hit the art world since Van Gogh chopped off his ear: Maryum passes her jail time by drawing pictures for the women in F Pod. Maryum’s artwork is hardly controversial, unless you’re a person who’s never set foot in a museum or bookstore. Anyway, Maryum drew a big heart for Amy, a fellow inmate. Inside the heart, bubble letters spelled out “Amy” while surrounded by a stained glass-esque series of colorful shapes. One of those shapes was a foot, another shape was intended to be the American flag. The foot was brown. The flag was red, white, and blue, which incidentally are not the colors of the Nigerian flag, as one concerned inmate gossiped.

GET A LOAD OF THIS, AMERICA!

Babar takes one look at the “Amy” heart, sees a brown foot touching red, white, and blue, and immediately interprets art for the first time in her life as an African American foot stomping (!) on the American flag. The drawing needs to be turned sideways for this interpretation to seem even remotely plausible.

Immediately, Babar is so offended she needs to be comforted by Tami, Amy, and her husband over the phone who has “given his entire life!” for America and is still like, “Free speech. Relax.”

If the foot was pink, Babar would’ve been like, “Cute pic!”

Mais non! (That’s French for “but no!” Babar.) Babar can not and will not let this crayon foot touching a crayon rectangle go. If Babar loves America so much, she might be interested to know that the United States was formed directly from a protest of another country with a red, white, and blue flag, and was formed in large part so that its citizens would be able to express themselves freely, including through crayon heart drawings. Babar might also be interested to know that she is reading way too much into a childlike drawing because either 1. she readily consumes propaganda fed to dumb angry people and regards it as fact and/or 2. she has lost her mind in jail. Either way, I would like to purchase and frame Maryum’s artwork. 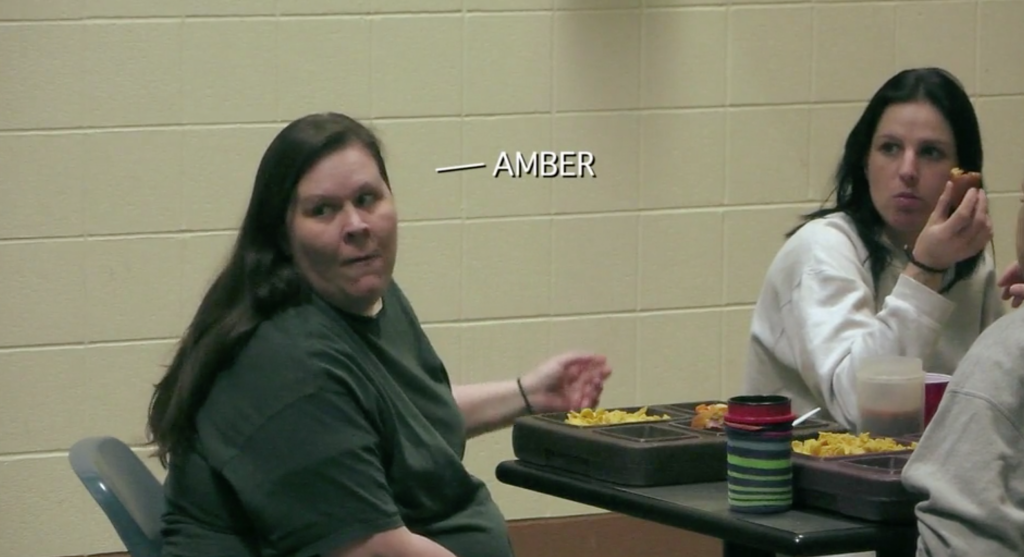 I would greatly appreciate it if there were drugs in my Fritos.

In far more important and reality-based Pod F news, Amber has arrived and quickly assumed the role of Pod Boss. Amber does not look like an “Amber.” I’m amazed she doesn’t go by “Switchblade” or “Margarita Bev.” Amber kicks off her stay in Pod F on Thanksgiving by leaving inspirational messages on every table in her teenage-girl cursive. While the mens’ pods celebrate Thanksgiving by ignoring the holiday all together, the women go around their tables and reveal what each are thankful for. 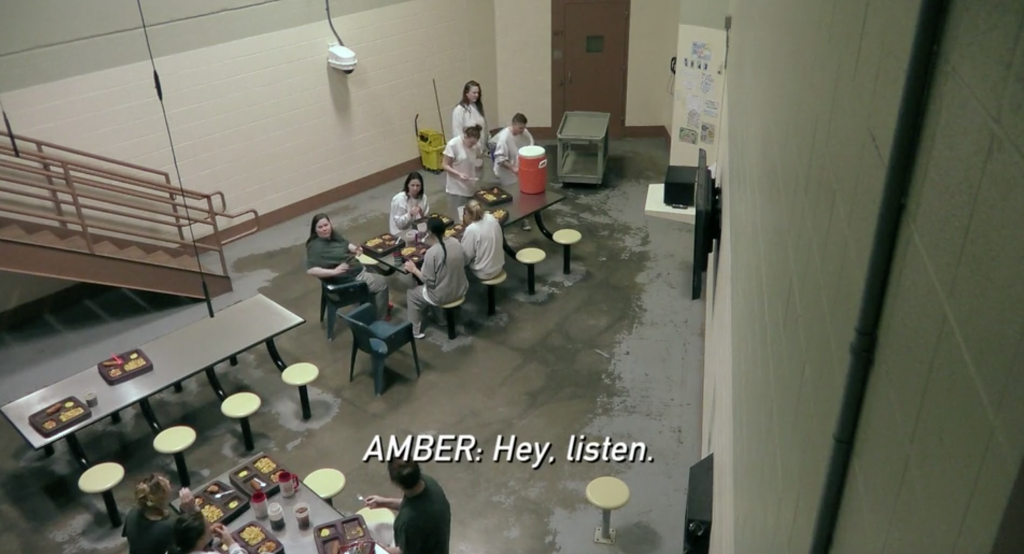 “May the road rise to meet you…”

Anyway, how Amber so quickly takes over remains a mystery but take over she does. During a Frito-filled lunch, Amber suddenly announces that she is expecting a delivery in her tray and if someone finds her delivery in their chips, their rewards will be plentiful. She and her goon-squad then threaten anyone who snags Amber’s stash. All of this is done on camera, so I don’t really understand how any of this is kept secret from the guards. Amber basically clinks her glass and makes a toast, going so far as to ask if everyone in the entire pod can hear before diving into her contraband delivery situation. This is the jail version of tracking a package and I applaud the boldness. Maybe if Maryum drew a picture of Amber’s baggie of drugs, it would be easier to find amongst the food trays.

Needless to say, Tami can barely contain her excitement at discovering this top secret crime announcement made publicly to everyone.

Tami when she finds out contraband is getting smuggled in on trays. #60DaysIn pic.twitter.com/ljumc0ooV2

Isaiah and Zac continue to plod along doing nothing interesting, other than Isaiah befriending the wrong people and Zac posting a picture of his child dressed as in prison garb. I know we’re supposed to like Zac, but I can’t get over his talking exactly like “Sling Blade.”

And Robert’s fecal problem has now been stretched out over three episodes. Basically, we got a mere two days of Robert interacting with criminals in the general population and four weeks of him sitting around segregation trying to figure out how to never go back. Robert is milking this constipation ruse harder than the time I tried to get out of Freshman PE by claiming permanent diarrhea. (I do not have permanent diarrhea.)

I still can’t get over how Robert presents every single sentence like a robot trying to mimic human traits. Does this mean he is a sociopath or simply a shitty actor? Either way, he is not at the life and death crossroads of constipation, but insists he must go to the hospital anyway. As Robert is not a real criminal (so far as we know) but instead volunteering to appear on a reality television show, he gets to go to the hospital and is thus off the show.

Unless he is made to go back somehow, Robert officially gets less time in real jail than Kohl’s cop Jeff, making Robert the biggest bitch in the entire American penal system. Big sigh.

Until next week, my 60 Day Friends, I wish you drugs in your chips.