This week brought us the finale of Season 2 of 90DF, but not to fear! Not only will there be a Season 3, but next week we get a Andy Cohen-esque reunion with all of the couples, hosted by NOT ME. What the f***, TLC? I’m so confused. Anyway, let’s get to the couples, because to no one’s surprise they’re all married now.

Sidenote, for some of you that are gloriously contributing in the comments section of these recaps, there’s a line between being sassy and snarky, and just being an asshole. It’s a subjective line, but come ON. You know who you are, you angry 90 Day Friends. 90% of you though, are like my favorite people ever.
Okay, here goes:

Cassia and Jason: After Jason left his own bachelor party and thus Cassia, he and his buds retreated to a table nearby for some ridiculous gigantic and feminine drinks. It was here that Jason realized that he missed Cassia and texted, “Hey Cassia, it’s me. I miss you. I’m sorry.” Apparently Cassia has not entered Jason into her contacts. So Jason left his own bachelor party and went “home.” By home, of course, we mean he went to their shitty motel. The following day, Cassia donned a slightly inappropriate wedding dress and was walked down the aisle by Jason’s dad, who found her so attractive, he just might marry Cassia himself! Ugh. Say what you want about these two hotheads, I think they sincerely like each other, and are just weird people in general. We are all weird people. God bless.

Danielle and Mohammed: 2 weeks after the wedding, Mohamed LEFT. The electric company shut off the lights and that was the PERF excuse for Mo to bounce. Where he went is anyone’s guess, although some of you in the comments seem to KNOW that he went to Danielle’s friend’s house and proceeded to hit on her 17-year old daughter. Maybe it’s part of Mohamed’s version of Ramadan to do whatever the fuck he wants 100% of the time, I can’t be sure. What I do know for sure, however, is that Faith is the only normal person in Norfolk, Ohio other than Paul Dolce, Esq. How Danielle had such a reasonable, bright, rational, smart daughter is anyone’s guess, but she had to have done something right, at some point, because Faith is a delight. Danielle’s sister and her handbag swing by for a heart-to-heart over Mo’s disappearance, and Sister Sara tries to alert Danielle that Mohamed might never be coming back. Mohamed DOES come back, however, and after checking the internet, claims he can do what he wants and closes the bedroom door. This is not a shocking turn of events, but I still loved it.

Chelsea and Yamir: It’s wedding day and Chelsea’s mom hasn’t finished Chelsea’s wedding dress, but she has Galesburg errands to run! If the dress is too long, they’ll just use scissors, okay? Yamir’s family arrives from Nicaragua, and they are all like Yamir; nice, normal and understandably nervous. Chelsea, meanwhile, it a Bridezilla because of the whole dress fiasco, and it’s kind of her own fault. I would not be able to go to sleep the night before my wedding if my dress wasn’t ready. Maybe we could stay up and sew something? Cut to, the wedding totally happens. And Chelsea manages to work Yamir’s former fame into her vows. Chelsea tosses a cardigan over her “dress” and the two live in Galesburg happily ever after until Yamir is able to go to the Latin Music Capital of the World, Chicago, to reignite his music career. I know I speak for all of you when I say that I plan to follow his fame forever.

Brett and Daya: After last week’s “overheard” convo between Brett and his mom, Daya agrees to marry Brett anyway, but claims she will never speak to his mom again. The mom responds by NOT COMING TO THE WEDDING, which is a pretty shitty thing to do. Even Sue and all of her racist concerns showed up. Brett wears purple accents, and Daya is walked down the aisle by some relatives in red. Cassidy behaves, even though her grandma refused to show up, and the highlight of the entire event was Brett’s former roommate Lou getting teary and saying Brett is like a son to her. Three cheers for Lou: Lou! Lou! Lou! Oh, and Daya gave Brett the cheek for the big wedding kiss. THE CHEEK. This does not bode well for Brett’s wedding night. At the end of the wedding, Brett asked Daya if the diamonds in his wedding ring were real. Ha! Brett has diamonds in his man-ring. 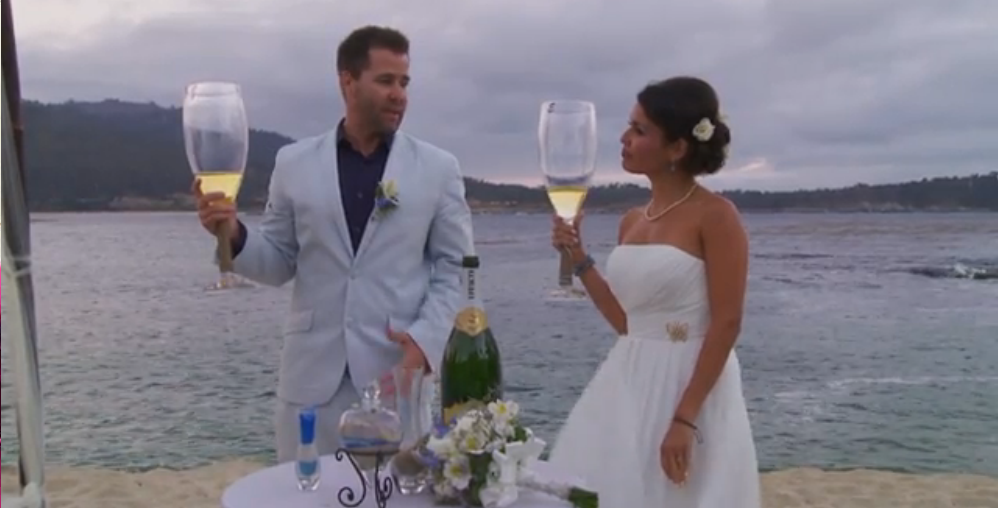 How were these wine glasses never addressed? (TLC.com)

Justin and Evelin: Justin and Evelin had a beautiful wedding attended by Justin’s family and friends. Justin’s mom really took the cake, as it were, and said some lovely things to Evelin. How could she not? Evelin is awesome. The windy wedding took place on the beach and unfortunately was not attended by Evelin’s family. It was, however, attended by the world’s biggest and weirdest wine glasses. What is the story with these wine glasses? Why? They looked like clown glasses, if clowns drank mid-level Chardonnay. Evil sister-in-law Jennifer attended and wore a statement necklace, naturally. She read about those in InStyle. She does not deserve Justin’s sweet mom as a mother-in-law. Evelin does. I wish all good things for her, don’t you!

There was no Danny and Amy this week, as they’re busy doing it.

Who will make it? Who won’t? Where was Mohammed, and why? And of COURSE, we will be watching the reunion. Your (kind, not-racist) thoughts in the comments please. And until next time, may all of your commercial breaks be brief…