Before we get into anything, can we just spend a moment on the highlight of my career and life. 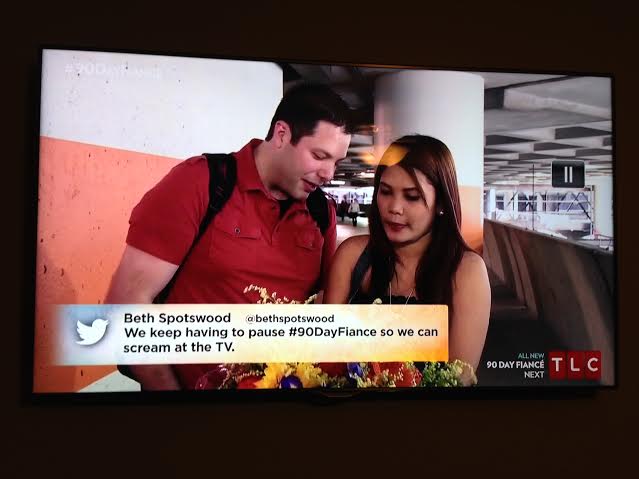 This came via text from my brother’s ex-girlfriend in Dallas. 90DF, you are my everything.

Justin and Evelin: While Justin may live in San Jose, he is clearly from elsewhere. I am an hour north of San Jose, so believe me when I tell you, Justin is not from San Jose. He is accent is stronger than Evelin’s. This week, Justin took Evelin to meet his old best friend Matt, who is basically Todd Packer from “The Office.” Matt and HIS girlfriend are like, “Have you introduced her to Jen yet?” And which point, the music screeches to a halt and everyone around America is like, “WHO THE FUCK IS JEN?!?!” Jen is Justin’s evil sister-in-law, and if previews of Jen are any indication, she is worthy of the build-up.

Danny and Amy: We finally get to meet Danny and Amy, the closeted gay rural Pennsylvanian and his 21-year old interracial South African girlfriend, who is gorgeous and normal. They met in Australian “Bible class”, Danny has over-styled hair, and all of his friends wear fitted clothes, so… I’d be friends with him! Because he’s gay! Danny and Amy are saving themselves for marriage, and can’t even make-out. This is due to the Lord. Amy has to stay in one of Danny’s dozen brother’s rural farmhouses, in a lavender room he decorated himself (side-eyes). Danny and his gays pick Amy up from the airport with a “Welcome Back!” balloon. Amy is interracial, and Danny’s dad apparently is a big ole racist. Wait till he finds out his gay son has a half-black fiancé.

Brett and Daya: Daya just landed from the Philippines, and is not only pissed about her welcome flowers, she is concerned her engagement diamond is fake. Daya has no problem pointing this out to Brett’s patient mother, who is like, “Um, you can go fuck yourself.” (I’m paraphrasing.) Brett’s roommates have given the “happy” couple the house to themselves for a few days because they are wonderful people. Daya wanted to take a nap, so while she was doing so, Brett made her dinner and cracked open a bottle of champagne. Daya, naturally, had a problem with the champagne. I guess it’s all Dom Perignon in Manila.

Danielle and Mohammed: WHERE TO BEGIN? Danielle’s brother is massive, wears all hunting clothes and has a handlebar goatee, if that’s a thing. His wife is 12-years old, tiny, as has a touch of the medical condition my mother calls, “Forrest Gump.” So Danielle is surrounded by weird relationships, and her love connection with Mohammed is on par with the strange thing her brother has going on. Mohammed and the one jacket he owns make themselves right at home at Danielle’s house, and her three daughters seem fine with this. Danielle’s 22-year old son Corey, however, wants to see this new man for himself. So Corey invites Danielle and Mohammed to a bar for some pool. Danielle arrives with Mohammed and immediately bursts into tears, which turns out, is actually how *Danielle greets every experience. Corey tries to play pool with Mohammed, but SOMEONE is a Tunisian pool shark and kicks Corey’s ass! Corey, who is pretty Forrest Gump himself, takes Mohammed outside and in a surprising display of sanity, says, “I’m afraid you’re scamming my mom.” Mohammed brushes this of, because he’s busy avoiding sex with Danielle. According to Mohammed, he can’t have sex because he’s a Muslim and it’s totally definitely not because he’s not attracted to Danielle. He loving describes her body as “acceptable.”

Chelsea and Yamir: Yamir is ready to fly off to rural Illinois to marry Chelsea, but first, his shady manager, Gabriel subjects “the Justin Timberlake of Nicaragua” and his band to a press conference, held in a shitty hotel conference room and attended by 30-or-so middle-aged people. There, Gabriel calls out Chelsea for being the Yoko of Nicaragua. No one cares, and Chelsea is really offended. Gabriel, meanwhile, is like, “You’re stealing my meal ticket!” Yamir says a tearful goodbye to his wonderful family, as Chelsea maintains her commitment to saving the world through organic shampoo, feminist folk music, and sidewalk jewelry.

Cassia and Jason: We still don’t get to meet this fiery couple. Hopefully Jason can survive another week with his apparently violent fiancé. TLC is really dragging out this Jason and Cassia storyline, so we can only assume that it’s going to end tragically.

What did I miss? What did you think? And until next time, may all your commercial breaks be brief!

*Thanks to commenter Laura on last week’s recap (and those comments are amazing. I love you guys so much), we can read this article on Danielle. Here are the best lines. “Mullins had been scammed by another person she’d met through a website. That individual opened a website under her name and ran fraudulent credit cards.” SHOCKING. And also, on her trip to meet Mohammed, “Mullins didn’t feel like touring the area, because she was concerned she might not have found her way back. Luckily, there were American television stations and people spoke English as a second language.” Finally, “She was at work when (Mohammed) Jbali called her on her cell phone. He decided to play a joke on her, telling her the visa was denied. Mullins began crying, but he quickly re-assured her it had been approved.” Mohammed is a jokester!