We have so much to talk about today, and I will do my best to provide you with a recap void of anger, but Danny’s fucking hair-dye, racist, insane dad haunted me in my dreams last night. I will try not to let that affect SND’s journalistic integrity in recapping TLC’s brilliant show, 90 Day Fiance.

Let’s get on with it.

Cassia and Jason: These two sassafrass’ head out to celebrate their engagement with an awkward trip to the beach and an $8 dinner, paid for by eBay transactions Jason makes at the dinner table resulting in… $8! Jason handles single-digit business transactions on his phone like he’s the Gordon Gekko of selling junk on the internet. When Cassia asked him to put the phone away, Jason said fine. He loves turning off his phone! Wanna know why? Because when he turns it back on again, a bunch of stuff has happened. This is a fact.

Evelin and Justin: Since Justin doesn’t want his family at their wedding, Evelin invites Justin’s sad-eyed mother to pick out her wedding dress. Evelin is beautiful and kind and the only voice of reason in this story-line. Also, Evelin might have a thick Colombian accent, but she speaks better than Justin. I am hopeful that Evelin will be able to talk Justin into including his mom. Sister-in-law Jenn, however, should be deported to a low-end maxi-skirt outlet mall in Kentucky where she belongs.

Mohammed and Danielle: Oh sweet Jesus, it just keeps getting worse. Money problems abound for these two. We all struggle with financial issues, but Danielle seems to be one $13 food bill away from eviction at all times. I find myself wanting to jump in and offer financial solutions; can Mohammed work under the table somewhere? Can her kids go sling burgers in town? I mean, another $200 a week would make all the difference in the world to this household of SIX people. Anyway, Dani has managed to downgrade wedding dresses to something more affordable. Her self-esteem issues prohibit her from standing up straight, fixing her hair, or smiling, thus making any wedding dress look pretty rough. I speak from experience when I say that some Spanx and self-tanner go a LONG way. Worse, Dani and Mo head to what my boyfriend deemed a “Pawn Shop” to pick out wedding rings, all of which seem to involve marquis cut “diamonds” in yellow gold. The first simple ring they look at was $1200. Too much! So the pawn shop man shows them a $700 ring. Still too much! Finally, the pawn shop proprietor (and his sultry assistant) ask how much they’re willing to spend. “$100.” Mohammed and Danielle leave the pawn shop with matching silver bands. Later, Danielle asks Mohammed to meet her in a rain-soaked park after his English class, where she announces that she is afraid to tell him some horrible news, which she reveals by handing him paperwork. Dani has been let go from her job (for reasons I can only imagine) and Mohammed is pissed. This is not what he bargained for when convincing himself to leave Tunisia for his rich American wife. Mohammed has some thinking to do, and Danielle reverts to her animal cries. Things are not looking good in what is clearly an American tragedy that is actually happening right now in Ohio. They better resolve things before the wedding, which is going to be officiated BY THE MAYOR. Clearly His Honor needs to see this shitshow with his own two eyes.

Brett and Daya: It’s time for Cassidy to go home, which makes both Brett and Daya sad. But first, Brett needs to host an awkward “barbecue party” in which he introduces Daya to his old-lady friend Sue. Because she is secretly in love with Brett, Sue takes Daya on an awkward walk around the backyard and reveals that she knows of many Asian women who married servicemen and they all got divorced. Sadly, this was not the most racist part of this week’s episode. I never thought I’d take Daya’s side, but Sue and her outfit from Chico’s need to set up an account on OurTime.com and let the Brett-dream go. We got a little peek of Lou the roommate this week, and ANY Lou is a treat. As usual, Lou was supportive of everyone and everything. When God is looking for people to turn into angles, Lou should be first in line. Sue’s “concerns” aside, Brett and Daya return Cassidy to her shockingly normal mom, Chanel, who says of Daya, “The more people Cassidy has on her team, the better.” This is some excellent parenting from Chanel. We also got a glimpse of a blurred-out man driving Chanel’s car. Her boyfriend/husband clearly wants no part of 90 Day Fiance. I wonder why? 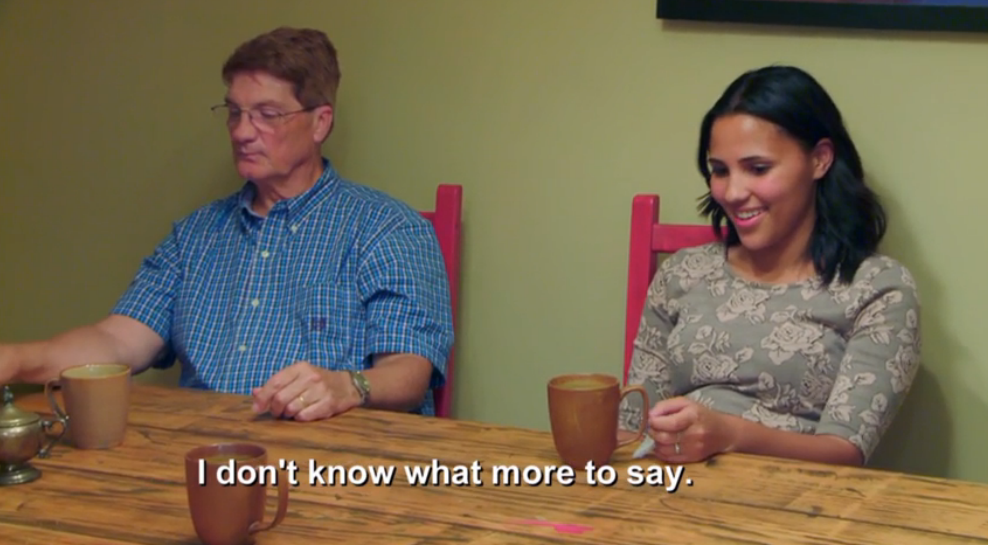 Danny and Amy: First of all, Danny drives a pink SUV. How have we never noticed this before? Danny’s parents are in town, and he takes Amy to go meet them and defend her skin color to racist strangers. Danny’s mother is sweet, kind, and FAR TOO quiet. But she greets Amy with enthusiasm and open arms. Danny’s father possesses a human’s worst quality; confident ignorance. He greets Amy and the dog at the same time, refuses any offered food or drink, and then proudly explains that he has no interest in EVER going to Africa, and inter-racial relationships are not accepted in America. Okay, hold on. I need to take 10 deep breaths. First of all, South Africa is a sophisticated, global presence. Cape Town is a world-famous, high-end tourist destination. The first human-to-human heart transplant happened in South Africa in the 1960s. As Amy said, “I do not live in a hut.” Second of all, the only person I know who has a problem with interracial relationships is Danny’s dad. And the only person in their future-child’s life who will make things difficult on that child will be his or her grandfather. As for mixed-race relationships not being accepted in America. I seem to recall a mixed-race person being elected President of the United States in a landslide popular vote. While Danny’s father clearly did not vote for Barack Obama, and probably would never vote for anyone of color, or a woman for that matter, it is HE who has the issue with skin color. This fake hair-colored, ignorant, stupid-sounding, nasty old man is proudly and defiantly on what everyone agreed a long time ago was the wrong side of history. His poor wife felt she couldn’t stand up to him, but offered, “You both will do great!” a couple of times. Danny’s mom is clearly trapped in a loveless marriage with a racist misogynist. But Danny had not a word to say to his piece-of-shit father. Amy sat there looking beautiful and rational, and refused to even engage with someone who would be well-cast as the villain in a Civil Rights Movement-era film. Next week, Danny’s folks meet Amy’s sweet mom. I bet we ALL wish we could be there to defend and empower these wonderful woman from Danny’s father, who will be remembered by his family, and now America, as a nasty, old, ignorant racist. Also, and I know we say this about the men in Danny’s family all the time, but Eve texted me during the show, “Danny’s dad is gay, right?”

This week took a much-needed break from Chelsea and Yamir. And with that, I need to go take a walk around the block and work off any residual anger. I’m dying to hear your thoughts in the comments! And until next time, may all of your commercial breaks be brief…