We can all agree that this week’s 90DF episode was a bit of a snoozer. That said, a snoozer 90DF is still better than the Dallas “Who Shot JR?” cliffhanger. Let’s discuss the couples: 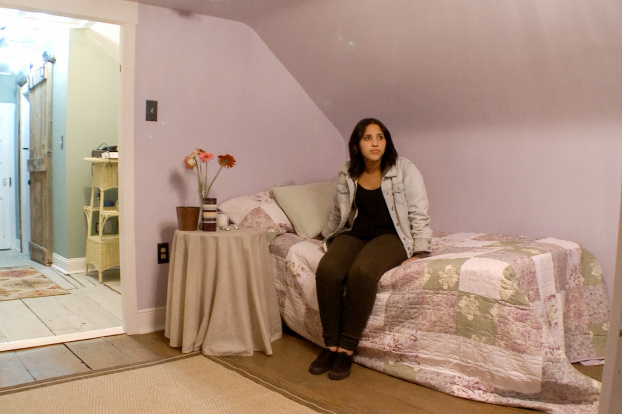 (You can see my previous 90DF coverage here.)

Danny and Amy: “Because we have faith, we have decided to stay abstinent.” Or so claims Danny, which is why his mixed-race South African fiancé is staying with Danny’s horrible brother Nic, who wakes her up in a hat and a hug. “You’re as tan as he said you were! Say sumpin’ African!” If a man wearing a hat as an accessory first thing in the morning in his own home wasn’t weird enough, Nic feels the need to constantly remind Amy that she can’t have sex. Danny has gone to work all day, leaving Amy with Nic’s nervous wife. He returns late in the evening, taking WAY too long to put down his bags (he stopped on the way home to shop) to greet Amy after her first day in America. Danny’s family is awkward, Amy is overwhelmed, and it would appear that Amy has found herself in a situation that will make an amazing story when she’s back in Cape Town with her real husband a decade from now. 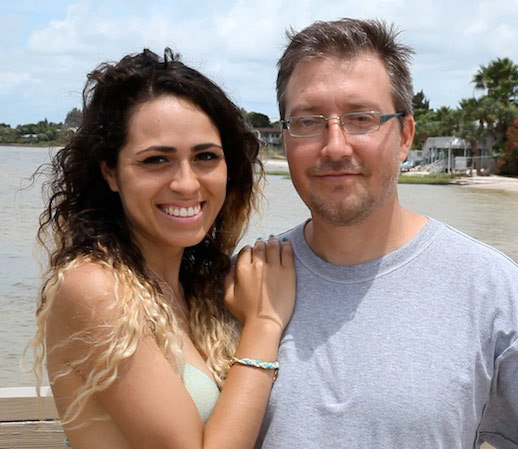 This photo will one day be used as evidence in a murder trial. (Image Credit: DCL)

Jason and Cassia: We FINALLY get to meet Jason and Cassia. Well, sort of. Jason, 38 lives in Florida with his father, and their dogs; “Cecilia, Kisses, Mercedes, and Frank.” Cassia is 23 and still in Brazil. Jason and his dad, Ron put paper bow ties on their dogs. In a dramatic twist, Jason met Cassia while she was involved in an online relationship with one of Jason’s friends from the Army. Cassia broke up with the “friend” and reached out to Jason, wanting to date him. SO HE WENT TO BRAZIL. Here’s a question: how do you get involved with your friend’s internet lover? I’m a big Facebook friend-requester, but… I just don’t get how Jason hears about his Army buddy’s girlfriend in Brazil and ends up engaged to her. That is neither her nor there, however, as Cassia is insane. But first, Ron and Jason have to clean their disgusting pool which looks like the vat of green stuff from “Who Framed Roger Rabbit?” While pool maintenance is going on, Jason is texting Cassia and remarks that she is “having a day.” Ron displays the epitome of unconditional parental love by supporting this union even though it is clear Jason’s life is in danger. Because again, this broad is nuts. Cassia is “perturbed” because she’s not getting enough attention from 5,000 miles away, and is threatening not to get on the plane. She’s having a tantrum via text, and it’s clear this happens every day. Jason has to fly all the way down to Brazil and hope she shows up at a mutually agreed upon airport. Cassia told Jason, he’d be “waiting for forever.” Nonetheless, Jason packs up his potato chips because they cost $15 in Brazil and “Homie don’t play that game” and heads down south to “wait for forever.”

Brett and Daya: Brett takes Daya to go pick up his young daughter Cassidy for a month-long stay, in which Cassidy sleeps in the same bed as the couple. Brett’s ex-wife CHANEL is gloriously cool about the whole thing, merely asking that they get the kid to bed by 9. Daya keeps worrying that she won’t be a good “Insta-mom”, a phrase which she repeatedly uses with disgust. Naturally, Cassidy is terrified of her father’s mail-order bride, and Daya is pissed that a 6-year old isn’t her instant best friend. Brett seems equally afraid of Daya and Cassidy, once again giggling through every awkward moment. Back home, Daya models her wedding dress for Brett’s mom, to which Cassidy shows some interest. This pisses Daya off, so GOD BLESS HER, Brett’s middle-aged lesbian roommate in a backwards cap and “I <3 Kentucky" t-shirt chimes in and says of the hideous, multi-tiered, highly flammable wedding gown, "That's awesome!" Give the roommates their own show. Mohammed and Danielle: Mohammed is invited to dine out with Danielle’s entire family, most of whom resemble the cast of “Duck Dynasty.” Shockingly, Danielle’s brother-in-law Paul might look like a dangerous redneck, but is instead, the only voice of reason about this whole Mohammed relationship. Paul has genuine concern for Danielle, and while he asks rude questions about “halal” food, Paul is the brains of Danielle’s operation. “When most people are in love, usually they hold hands a lot,” observes Paul. “And there was some distance that he (Mohammed) had. You know, little things like that.” Paul remains suspicious, as well he should. Camouflage aside, we are all on Team Paul as Danielle and Mohammed move forward. 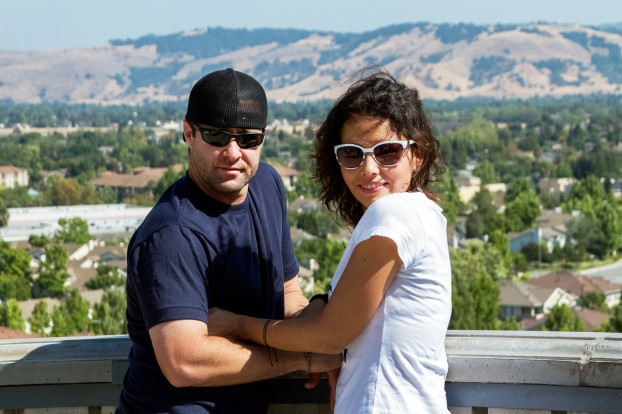 Justin and Evelin: Just had not told his family that he’s dating anyone much less engaged. None the less, he brings Evelin to some pre-arranged family beer-can gathering alongside a cheap condo-complex pool where Justin announces, “I got the donuts!” and holds up a bag of donuts. Then he introduces Evelin, and confesses that they have 90 days to get married. Justin’s horrible family then sits down, as if on cue, and demands to know Evelin’s intentions. The infamous sister-in-law Jen lives up to her reputation as “Darth Vader” by hissing, “She’s using him for fucking green card!” to the entire South Bay Area. Justin’s brother wonderfully replies, “So what?” Jen is one of those people who gets in fights at the beauty salon, where she hangs out all day and has “enemies.” Listen, my brother is happily married to an American citizen, but if he brought some woman over and gave us the 90DF story, we would be polite and talk about them after they left. Then my mother and I would get my brother alone hold an intervention. IT’S NOT THAT COMPLICATED. Jen is clearly the worst person in the world, and Justin grabbed Evelin and stormed out. I am no Justin-fan, but this Jen is ridiculous. She’s like a Hollywood villain in a chevron-print maxi-dress and Coach handbag. From the Coach outlet. On sale. In 2004.

Yamir and Chelsea: We saw none of them in this episode. Sadly, we also got no Gabriel.

What did I miss? What did you hate? Keep those amazing comments coming! And until next time, may all of your commercial breaks be brief!