Let me just stop you right here and let you know that we get ZERO Mohammed and Danielle this week. For many, I suspect the Danielle-Mohammed storyline is the main purpose of watching 90 Day Fiance. This week, we dealt with everyone else, all of whom are in less dire straights than the Danielle-Mohammed 90-Day Fiasco.

Now let’s get to the couples and their shit:

Brett and Daya: If we heard the “Word” Instamom once, we heard it a hundred times. Daya is none-too-pleased to spend all of her days in America with Brett’s young daughter, Cassidy. Cassidy responds to this by locking Daya out of the house, a choice which I totally co-sign. Kids can read cues, and Daya is sending Cassidy a very clear message. So, yep. Lock her out Cassidy! Eventually, Daya warms to Cassidy and the young girls responds accordingly. Kids are cool. Daya is not. This week, I was left wondering where the hell Brett’s middle-aged lesbians roommates, Lou and T have gone off to. Lou and T bring a genuine kindness, lack-of-judgement, and support to the proceedings. Also, I want to watch them interact with Daya. This week, Daya managed not to complain about any jewelry or flowers she was gifted. 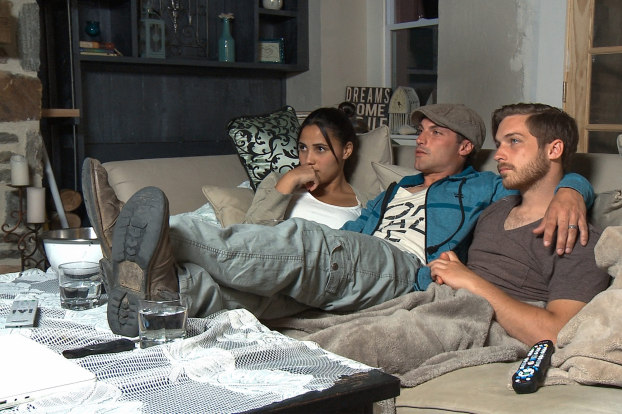 Danny and Amy: This week, Amy’s mom Lorna flew out to Pennsylvania from South Africa to help her daughter select a wedding dress and get married. If I thought Amy was fantastic, I’m over-the-moon for Lorna. She is kind, rational, compassionate, smart… how these beautiful South African women ended up at Brother Nic’s closeted gay club of a house with a racist dad boggles the mind. In defense of the Pensylvanians, however, Amy’s future sister-in-law Heather arranged for a bachelorette weekend, and she thoughtfully tailored the proceedings to Amy’s interests and taste. When coming upon her ladies-only sunset picnic, Amy actually burst into tears and admitted to finally feeling less alone. The ladies at the party, most of whom neither the audience nor probably Amy had laid eyes on before, all gave Amy sexy lingerie from the 1990s, and answered her sweet, innocent questions about sex. Basically, they all said it was beautiful moments, or whatever. Amy also had to answer questions about her groom including what kind of underwear he wears. As they have not had sex, Amy guessed “Briefs.” Sadly, her fiancé is gay and the answer was boxer-briefs. Amy and Lorna, as well as Heather went to pick out a wedding dress, and Amy looked flawless in each of her choices. She is really beautiful and I don’t want to marry her closeted fiancé. On next week’s episode, we get a sneak peek of Danny’s racist dad being racist. I honestly don’t know if I can take it, especially after Amy’s sweet mom promises that once Racist Dad sees how beautiful she looks in her wedding dress, his racism will wash away. It won’t! He sucks!

Justin and Evelin: Justin and Evelin decide to invite Justin’s bother Jake and his evil wife who shops at Chico’s over for Colombians food. Coach-wristlet Jennifer and backwards baseball-hat Jake immediately begin interrogating Evelin, asking if she’s been married before (no) and just exactly how many kids she has (none.) “Wait, how many Colombian kids do you expect our family to support?” “Zero, you junior varsity douchebags.” (I’m paraphrasing. At this point, Justin announces that he and Evelin plan to “EEEE-loupppah.” I thought I was going to faint, Justin pronounces elope so annoyingly. It made me physically sick. Evelin expressed concern, and Jake searched his brain for one normal thing to say and then explained that their mom should be at the wedding. Jennifer sat there with a big disappointed look on her face, probably because she was slowly realizing that the ugliness on her insides is oozing out of her giant, giant pores. 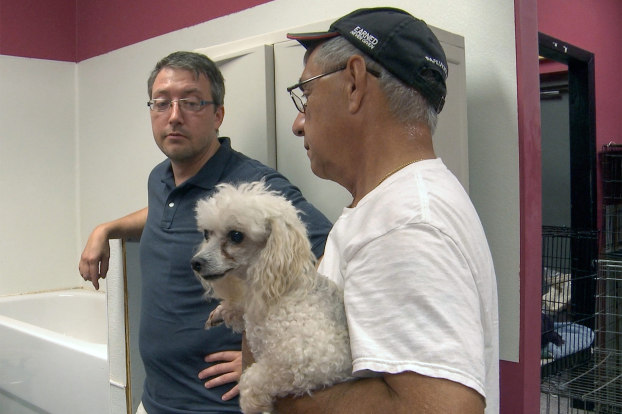 Please tell me that this is “Kisses.” (TLC.com)

Jason and Cassia: Jason’s dad is back to working on his precious floors while Jason and Cassia dress inappropriately for the Tampa aquarium. Things are rough between the couple, so Jason decides this would be a good time to propose since he is 95% sure he should marry Cassia. Jason’s dad remains concerned, but Jason has the bright idea that he will propose at the shark exhibit because he’s so unique and weird. According to Cassia, the aquarium “smells like fish.” The proposal was awkward, but as you know, Cassia sent us a fun message, so we like her. Anyway, Jason proposed by the sharks and Cassia said “Yess?!?!” And then 12 people in the Tampa aquarium awkwardly applauded.

Yamir and Chelsea: Still reeling from the news that Myla Vox has moved on without the “Justin Timberlake of Nicaragua” and unwilling to take a job at the meatpacking plant, Yamir has sent his demo to music types in Chicago, 3 hours away. He’s been granted a meeting with a producing team that has worked with the likes of Stevie Wonder and Diana Ross, neither of whom are known for their work in Latin music. but whatever! It’s a meeting in Chicago, not exactly known for Latin music! Yamir is very sweet and genuine during the meeting, but gets stuck when he doesn’t know the English words to things, and then we’re all left in awkward silence. Chelsea has not attended the meeting, and is instead wearing a fedora and drinking tea (naturally) in a coffee shop. She was probably also writing poetry. We’ll never know. Then Yamir sings. Like all of you, I was expecting Justin Timberlake in Spanish. UM NO. He rapped. He rapped en Espanol, with occasional outbursts of “Check it out baby!” The producers told him that he should move to Chicago if he wanted to work in music. Chelsea was like, “What? I’ve been volunteering in Nicaragua. I want to settle down by the meat-packing plant.” I think the two of them should settle down in Miami.

Next week, it’s racist Dad and Danielle reveals some paperwork to Mohammed that upsets him. No doubt this news is financial. Still, I can’t help but watch that train wreck. And I know many of you feel the same! Until then, may all your commercial breaks be brief…