Let’s ignore the fact that the ladies of Slow News Day were totally snubbed by the people who picked the host of the first ever 90 Day Fiance Reunion Special, and try and focus on the couples updates. It’s hard, I know. Eve and I would have done a much better job that some news broad who couldn’t even muster the nerve to ask Mohammed and Danielle to kiss. Also, the reunion features a lot of clips of particularly awkward parts of the show. None of the couples really talked that much, and few tidbits were revealed. And while Paul Dolce, Esq. was included in a clip, he was not asked to appear in the reunion show and assist with any annulments. Next year, TLC should have Attorney-at-Law Paul Dolce, JD offer legal advice to every 90DF couple, so that I can bask in the Bieber-banged, full-figured glory that is Counselor Dolce.

Moving on to this total bust of a reunion!

Brett and Daya: Does anyone know what lip color Brett was wearing for reunion? What is that, Benetint? Daya seemed particularly hurt by reactions she got, but hello? She had her engagement ring checked for legitimacy, and complained about her welcome flowers. I’ve written my share of regrettable internet judgements, but I stand by my Daya observations. Her behavior in the first half of the season was hardly the tearful, shy, InstaHumble we saw at the reunion. Brett also revealed that he went through a painful divorce in the past, presumably with Chanel, and that’s why his mom is so protective of him. In fact, Brett’s mom is SO protective, she hasn’t spoken to him since the wedding. Nice parenting! Also, divorce is illegal in the Philippines. (Need confirmation from Paul Dolce, Esq.)

Mohammed and Danielle: Mohammed and his one jacket just jumped right into the reunion, being the first “cast member” to even speak. I didn’t see that coming. Me thinks someone is liking the limelight of America. Or maybe he just likes the lights, because rumor is, they get shut off at Danielle’s house from time to time. Danielle spent much of the reunion hunkered down behind Mohammed’s shoulder, which is all of the action she’s allowed to get. Neither one of them has made eye contact with one another ever, and I suspect Mohammed just makes up religious rules constantly so that he never has to engage in any way with Danielle. For example, the “host” asked how Danielle felt about Mohammed calling her acceptable. “I think it means he thinks I’m beautiful.” Oh dear. Mohammed then said he was 60% in love with Danielle and 40% wanting to get the hell out of Tunisia. He also proudly announced that Danny and Amy weren’t the only couple who waited on the wedding night. While the “host” went on to quiz Danny and Amy about the big deed, no one asked Mohammed and Danielle if they have ever had sex, much less how it went the first time. I’d be amazed if these two ever high-fived. They do not know each other Biblically. Also, as pointed out in the comments, there was great discrepancy in how long Mohammed left, and where he stayed during his ‘lil break. Norwalk, OH is 100% drama. 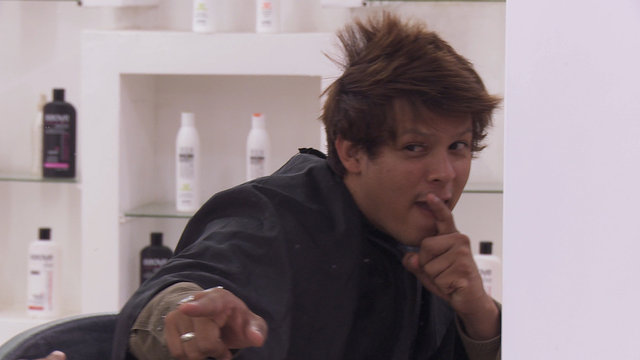 “And boyfriend and Colombia and yeah!” Trademark: MylaVox (TLC.com)

Yamir and Chelsea: These two had very little to contribute to the reunion. I think seeing themselves on television, edited and then discussed on what Danielle calls, “the so-shul meedya” has provided a few of the couples with regret. Yamir and Chelsea sat on the end and at one point, Yamir rapped by shouting words while Cassia enthusiastically clapped. Like the rest of you, I sent the rap hiding under a blanket and waiting for it to be over.

Jason and Cassia: These two weirdos seems to be doing well. And Cassia got her hair all the same color, which looks fantastic on her (and all humans.) There was no update of the Swiffer dad or Kisses the dog. Cassia did dive in and defend Danielle, pointing out that she and Jason had just as much of an age difference as Danielle and Mohammed. I appreciated Cassia’s sisterly solidarity. Perhaps in person, Danielle brings out a protectiveness in others.

Justin and Evelin: Evelin was allowed to speak several times, which was nice. The “host”, however, dropped yet another ball and didn’t ask about Darth Vader Jen or the giant wine glasses. Like Chelsea and Yamir, these two stayed pretty quiet throughout the reunion.

Danny and Amy: They had sex! And it was okay! Danny kept talking about the levels of intimacy and when to add sex to the intimacy and how sex heightened their intimacy. I was happy we got to see clips of Danny’s dad being a shitty shitty racist, because I want to see him shunned at the Piggly Wiggly back home. Danny and Amy claim that he’s coming around and they’re “teaching” him how to not be a racist Nazi.

There was no mention of Brett’s wonderful roommates Lou and T, nor did Danielle squeak out an update on her normal child, Faith. As I’ve stated again and again, there wasn’t nearly enough Paul Dolce, Esq. Those four were the best things to happen to this season of 90 Day Fiance.

Okay nerds, what’d I miss? What did you love? What did you hate? Who surprised you? And will you buy Yamir’s album, “Live from Galesburg, Boyeee”?

What show shall we recap next?!?!