While we are bummed that ONCE AGAIN, producers of the reunion failed to ask the ladies of Slow News Day to host, I will begrudgingly admit that the interview broad did a way better job this time. It would appear her questions were given to her by someone who actually watched the show. Well played, TLC. 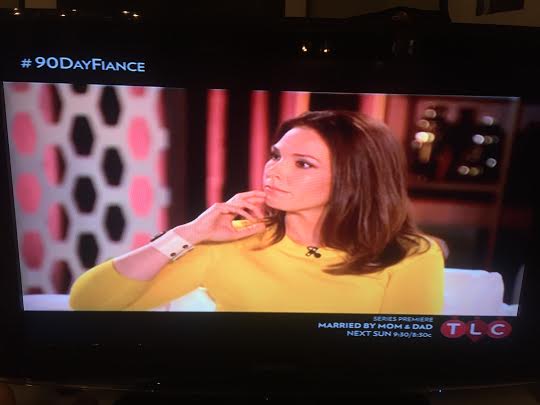 This is the official expression of, “Are you fucking kidding me?” 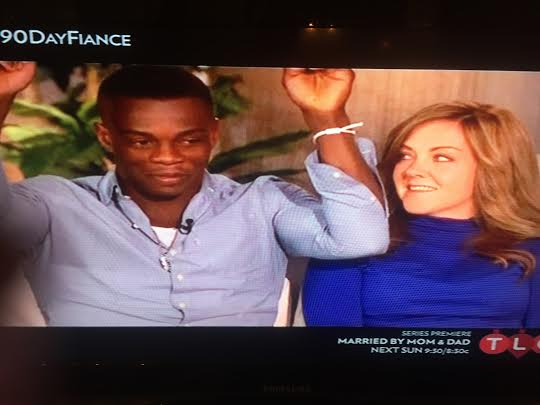 Melanie and Devar: These two were all over each other in a dramatic display of public affection to show us all how sincere their love is. We get it, you guys. They don’t need to justify this to us. Because I am nosey, I was hoping that the host would ask Melanie what Hunter’s dad thinks of Devar. Alas, she did not but I really hope he’s embracing Hunter having another adult in his life who cares for his child and his child’s mom. Also, Devar said that whole thing about him sending 90% of any income he makes to Jamaica was just a joke. You and I know full well that was no joke, but I also think that Devar came to his senses. He’s not going to send 90% of his sexy lifeguard money to his 47 sisters in Jamaica when Bev’s above-ground pool needs a new filter. It’s just not going to happen. That’s about all that’s worth mentioning from these two, other than to note that Margarita Bev is dragging Melanie and Devar onto Dr. Phil this Thursday. As you know, Dr. Phil has made our list of Hot Bald Guys, so this is an exciting moment for Slow News Day.

Fernando and Carolina: These two seem more normal now that the show is ended, but honestly I’m just afraid to say anything about them because Mama Fernando will gut me like a fish. Do you think Mama Fernando has any idea she’s become a cultural icon? Can I pay her to attend parties and insult my guests? Carolina misses her cat, and Fernando’s changed for the better, apparently. Oh, and when the host asked every couple which of them was in charge, both Fernando and Carolina said “Me!” The correct answer is neither. Mama Fernando is in charge.

Kyle and Noon: God bless these two. I mean it, may God seriously bless them. Poor Kyle was subjected to seeing his mother on camera again, and asked probing questions about his dad which we all wanted to know but must have been tough for him. They seem like genuine equals in love. In addition to the “Who’s in charge” question, each couple was also asked which one of them most frequently instigates sex. At first, I recoiled at the question but after a second, I was like, “Yep, I want to know this.” Anyway, Kyle said that of course he does because Noon is so sexy. It was a sweet answer to a creepy question. How that man emerged so normally from such disfuction is a testament to the strength of the human spirit.

Loren and Alexei: These two are still apparently fighting over the bachelorette party nightmare and in fact, debated even attending the “Tell All” because they didn’t want to re-live the horror. What we didn’t see on the show, it turns out, is that Alexei had his own stripper-filled bachelor party before Loren’s. NICE EDITING SHARP ENTERTAINMENT. I’m actually mad, like this was information we needed in a time of crisis and not the lowest form of entertainment in the history of culture. Loren spent much of her time on camera shooting the side-eyes at everything Mark said. Plus one for Loren.

Aleksandra and Josh: These two STFU during the entire reunion and clearly wouldn’t have shown up were they not contractually obligated to do so. The host asked Aleksandra what she did back in Prague that was so shameful, to which we got a vague answer. And when asked about their wedding night and Josh awkwardly stumbled over the answer, Aleksandra chimed in, “It was perfect.” It was indeed, because Aleksandra is pregnant! Josh’s parents must be as over the moon as they get, which means that upon hearing the news, they forced a terse grin and nodded confirmation that their brain had received the information. Josh’s folks are pretty sure that a baby Joseph Stalin in a fur hat and a bottle full of vodka is going pop out of their daughter-in-law. Josh looked miserable to be there throughout the entire reunion, but he looked most miserable when watching the clip of Aleksandra Skyping with her male “friend” and saying how much she wanted to move back to Prague. Oh yeah, that happened. On a bed.

Nikki and Mark: I don’t even know where to begin with this couple, but they’ve clearly gone downhill since filming the show. Nikki is borderline catatonic and when she was allowed to speak, forced out pre-approved statements. Mark, meanwhile, has turned into a whiney version of the guy from “Sleeping with the Enemy” and is so controlling, even the host had to tell him to shut up and let Nikki speak for herself. Mark managed to inform us all that if Nikki wants to own anything of any value, she’ll have to get a job and buy it herself. Said Mark, “We will never create anything together.” Including a healthy relationship, apparently. The host (whose name I won’t use because I’m still mad it wasn’t me) asked Mark what would happen to Nikki if he died, and he kind of vaguely replied that she’d be taken care of. Translation: there is a small stipulation in his will that in the event of his “untimely death”, Nikki will get a stand-by ticket on a lesser airline back to Manila. Mark went on to say that if she so wished, Nikki could get a job and take out a life insurance policy on Mark which she’d be responsible for paying for herself. Earth to Mark: Do you watch “Forensic Files”? You should.

Worst of all, Mark told us that before Nikki, he’d been on 100 dates with women wherein he presented them with up to 24 roses, took them out to 4 and yes, 5-star meals, wowed them with sparkling conversation, and yet every single one turned out to be a humiliating train wreck. It was for these reasons that he selected Nikki from a catalog. And anyone who has a problem with him has the following 5 things in common: 1. Fatties, 2. Women, 3. Alone, 4. Jealous, and 5. HE FORGETS OKAY?!? Mark was one more embarrassing clip away from storming out of the studio because the host was messing with his happiness.

Oh wait, that wasn’t worst of all. Excuse me. WORST OF ALL, Mark revealed that when he asked Nikki’s dad for her hand in marriage, her father said, “Promise me that you’ll treat her like a daughter” and Mark agreed. Ewww! In addition to that statement being super gross, Mark is kind of a mean dad to Nikki. #4KidsInDiapers

With that, Season Three of 90 Day Fiance is officially over… until the “Where Are They Now” episode, to which I predict we’ll have some no-shows. Naturally, your thoughts in the comments please, and remember – Mark raised four kids in diapers. Don’t fuck with his bliss or his moderate life savings.