I missed the first episode, so we’re going to catch up on the 5th season of “90 Day Fiance”, airing now on TLC, with Episode 2. As usual, we must ask ourselves, “how and where do they find these people?” And also, as we’ve noticed in the past, there are usually two or three couples whose improbable love story dominates our interest. I have my favorites already. Let’s get started: 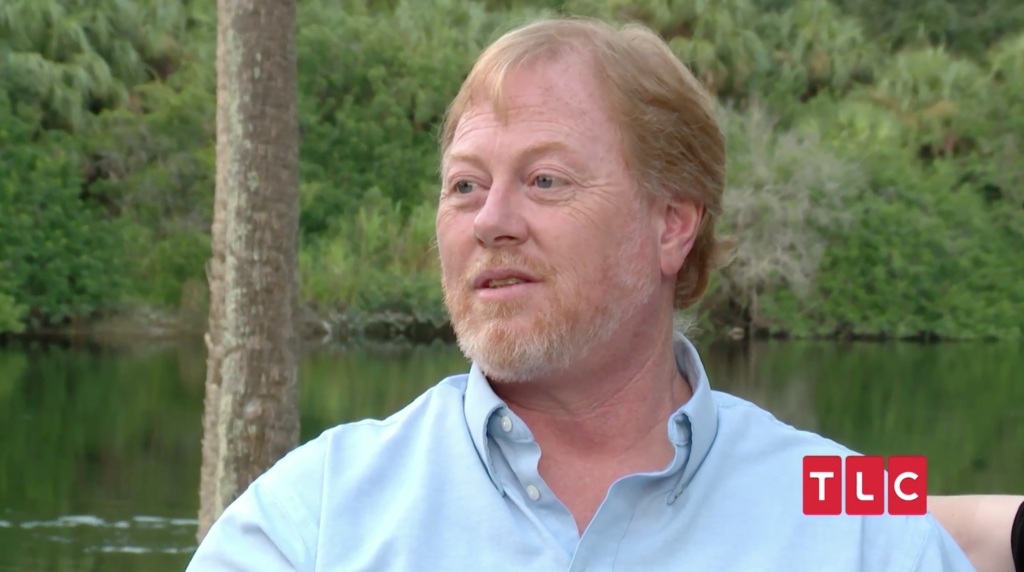 Nicole and Azan: This couple, previously featured on 90 Day Fiance, return to the show – which in their case should be titled, Thousand Day Fiance. Nicole is taking her 4-year-old daughter May to Morocco to visit Azan, who still lives there and still wants Nicole to hit the gym, which she has not done but neither have I so no judgements. First of all, who else is jealous of May? I would gladly accept a free trip to Morocco accompanied by a Florida-based bad decision-maker just following her heart. I don’t know why Nicole’s family is so worried about taking May overseas. It’s an adventure! Although apparently when I was a baby my folks took me to England and my grandma gave them a LEASH for me. So maybe it’s a grandma worry thing I just don’t get. (OMG, I just noticed that Nicole has May on a leash. Twinsies!) Anyway, Nicole doesn’t make enough money to sponsor Azan’s visa to come to the Unites States so her completely out-of-it dad and stepmom agree to sponsor him, much to the disapproval of Nicole’s mom, Robbalee. Nicole’s dad might seem like his mind is comfortably residing on another planet but if he is sponsoring Azan just to piss off Robbalee, that is some sneaky ex-wife trolling.Anyway, off to Morocco go Nicole and May, like a pair of Sex in the City divas. Upon landing and meeting him for the first time, May immediately calls Azan “Daddy.”

Evelyn and David: Evelyn is an 18-year-old New Hampshire go-getter and the kind of Christian who identifies themselves readily as a devout Christian. “Hi, I’m here to check into my hotel room. Last name Smith, proud Christian.” Evelyn is headed straight for heaven folks. Just so you know. Anyway, Evelyn performs breathy baritone in a band with her family, much like the Von Trapp’s only Evelyn has an EP, whatever that means. 26-year-old David discovered Evelyn and her bare midriff on social media all the way from Grenada, the island nation where the United States easily wins wars. The couple met IRL in Spain and obviously fell in love at first sight, thus meaning that they got engaged at first sight – or soon thereafter. Both virgins (take all the time you need), the pair refuse to sleep under the same roof until their wedding night because of the Lord. What about in an emergency? What if there was a natural disaster in New Hampshire and David and Evelyn had to stay in an evacuee shelter on cots mere inches apart? What would Jesus do? (Pretty sure he’d sleep on the cot and not complain about whether or not it impacted his sexual purity.) Anyway, David and Evelyn have a lot of conversations about wedding night fantasies.

Molly and Luis: This is one of two couples we’re watching for this season. Molly is a Southern mom with the speaking cadence of George Herbert Walker Bush who met Luis, a childlike Dominican bartender while on vacation. The bride-to-be has a disapproving daughter and Luis has his bags f***ing packed! Molly’s dad has been described as a “bigot” yet Molly wants her Daddy to walk her down the aisle so – methinks we’ve identified this season’s villain. According to Molly’s daddy, if she followed politics she would know that “the border has pretty much been closed” and those wishing to enter the United States must find desperate American singletons. Here’s a fun fact for Molly’s dad, if he followed actual numbers provided by United States Homeland Security. In excess of half a million immigrants have legally entered the country in the first half of the 2017 fiscal year. While yes, our current administration suffers from Islamophobia, the Dominican Republic is not a Muslim-majority country and thus maintains the same immigration process  it did prior to Donald Trump, professional golfer’s election. In fact (more facts, ugh), according the Homeland Security, the Dominican Republic is one of the top 6 countries from which people legally immigrate to the United States. And other than Chantal y Pedro, it’s not all through K-1 Visas. In closing, Molly’s father is a distributor of fake news.

Annie and Dave: This is the other couple you’ll want to pay special attention to. Annie is a 24-year-old Thai woman who requires a dowry for her hand in marriage. Dave is 48-year-old native Kentuckian and is highly concerned with his finances. Dave lives in Thailand for reasons we don’t understand but involve a divorce and rapid weight-loss. The main focus of Annie and Dave’s storyline is this whole dowry saga, which involves a specific amount of cash, pieces of gold, and a water buffalo. Really. Truly. I am not making this up. Anyway, Dave can’t afford all of this and Annie can’t understand why. They both have a point. Annie’s dowry needs seem very suspicious, as if she’s making them up on the spot in an effort to fleece her dumb American boyfriend. On the other hand, if I’m a hot, young Thai woman, I’m going to expect my 48-year-old finance to drench me in gaudy jewelry and McMansions. Annie openly regards Dave as unattractive and says she loves him 90%. 10%, you see, she does not love him.

Elizabeth and Andrei: These two foxes meet in Ireland but neither are from there. Elizabeth comes from a large, terrified American family and Andrei comes from Moldova, which is a real country and not “The Princess Bride” location that you are probably picturing. Andrei is big strong man not afraid of nothing and Elizabeth insists upon rolling her tongue every time she says Andrei. I’d be less on their side if Elizabeth didn’t have the two stepsisters from “Cinderella” side-eyeing her every move and complaining to their father about it. The Cinderella sisters are the type of women who dramatically hold their straws when sipping. I don’t know what that means exactly, but I know it bespeaks of a TYPE – and that type has acrylic nails.

Josh and Aika: Josh and Aika have received very little screen time. I don’t know what their deal is but they met on a Filipino dating app. Thrillingly, Aika is a whopping 36-years-old. Next week’s preview seems to focus more on them.

I’m much more invested in “Before the 90 Days” spin-off show, also on TLC. I presume you’ve all been watching that because it’s delicious and spectacular, much like the last episode of “MASH” or that 1985 “Alice in Wonderland” television special. You really should be watching it. And this season of the classic 90DF. And anything on TLC because it is the most ridiculous America has to offer.

Until next time, my 90 day friends, I await your brilliant commentary – and may all of your commercial breaks be brief.