90 Day Fiance has introduced us to some truly spectacular characters, but few have won over my heart like “Mama Fernando.” TLC needs to give Mama Fernando her own spin-off series in which she throws shade at all of her neighbors. I will move to Miami and operate the boom mic for free. That show needs to happen. Mama Fernando 2016!

Let’s disseminate this week’s episode, so that I can get back to re-watching my Mama Fernando clips and hoping some of you know how to make them into Gifs I can text Eve.

How Elise ended up so normal we shall never know.

Mark and Nikki: These two are predictably going downhill fast, in large part to Nikki’s sheer independence, which I don’t think Mark was expecting. Now that he’s no longer on vacation, Nikki is realizing what we’ve all already figured out: Mark is super weird. Wisely, she decides to hit up Mark’s daughter Elise who lives in a shed out back for a girls junk shopping trip. Nikki reveals that she and Mark have been fighting a lot, and the remarkably well-adjusted Elise takes Nikki’s side.

Mark and Nikki decide to take a mini-vacation to Ocean City, but Mark doesn’t get two miles outside of Baltimore before he starts talking about his notorious ex-wife and some broad he met in Hawaii. This puts Nikki is a shitty mood and their day at the dumpy Atlantic beach is ruined. Over raw food in a sea shanty, Mark promised to work on dropping his ex-wife’s name all the time. Nikki seemed unimpressed. 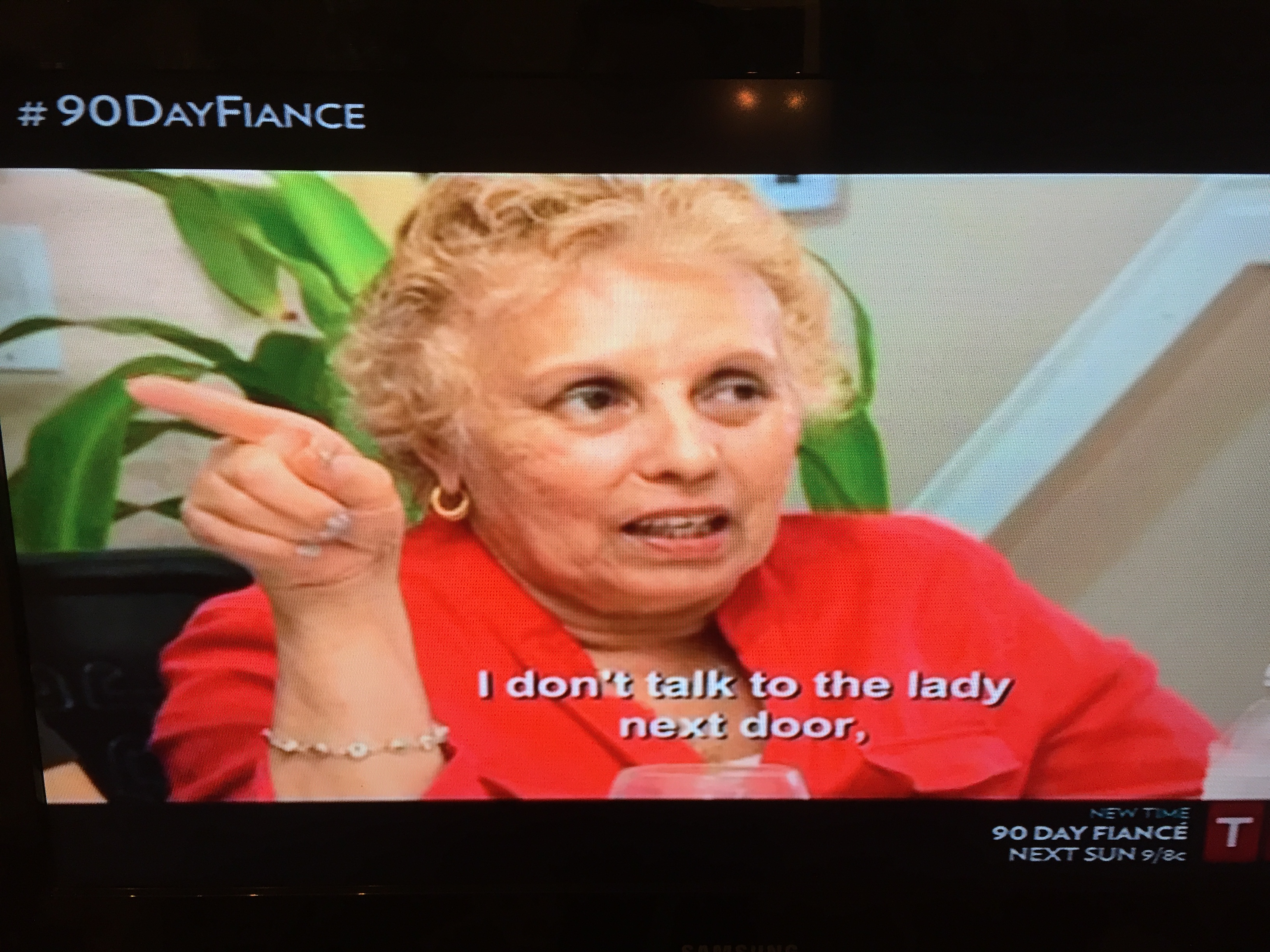 Fernando and Carolina: With their Visa finally approved, Carolina flies to Miami to move in with Fernandito and Fernando Sr., and more importantly, Fernando’s mom who Carolina referred to as “Mama Fernando” which is what we shall call her forevermore. Mama Fernando is a shade-throwing diva and I love her. I love her with all of my heart and soul.

Before we get into Mama Fernando’s direct quotes, let’s recognize that thus far, Carolina is perfectly lovely and normal-ish. Fernando (excuse me, Fernandito) is the one with complex womanizing issues, failed marriages, and dad jeans. The fact that Mama Fernando has an instant problem with Carolina before ever meeting her speaks volumes about Mama Fernando. I do not agree with her behavior, nor do I approve of it. But as a reality television viewer, Mama Fernando has made my year. In the interest of brevity, I’ll need to bullet point her quotes and actions:

– Fernando’s ‘Welcome’ decor looks like “a child birthday party. LOL.”
– “How come she don’t like flowers? Then that’s gonna be a problem with me.”
– “It’s another person in this house. Maybe there’ll be a problem.”
– “After tomorrow, I disappear.”
– Mama Fernando wanted to know if the NSA had their dogs search her luggage for drugs.
– “Was it first time that you used plane?” (This was her first question to Carolina.)
– “You like cats?” “I love cats.” “I don’t like cats.”
– “You sit here.”
– Mama Fernando has two sets of neighbors she doesn’t talk to because they’re Colombian.
– “You get fat here in about a month.”
– “The Colombian people are really crazy. (WAIT FOR IT) Because the white powder.”
– According to Mama Fernando, Colombians are the only ones who bring drugs into the United States.
– Fernando Sr. serves the food while Mama Fernando directs the proceedings.

PS: What is up with the skinny brother who appeared out of nowhere? Clearly Fernando is the favored son and this poor guy must feed from Fernandito’s floor scraps before retiring to his pile of rags in the basement.

Josh and Aleksandra: Aleksandra’s parents are flying into Idaho all the way from Russia! I’m assuming they changed planes in Civilization, USA before landing in Des Moines or wherever. There are probably not direct flights from Moscow to Rexburg. Anyway, Vlad and Svetlana are normal, affectionate, smart, happy people. I was instantly terrified for them meeting Josh’s robot parents. Lucky for Vlad and Svetlana, they get to stay with Mormon Grandma for the next 8 days before the wedding. Mormon Grandma seems quite nice and serves orange juice in a crystal carafe at a formal breakfast every morning, so you can’t do much better than that. Meanwhile, Dirk and Nameless Sad Mom decide to cook cabbage and onions in a hole in the ground because that’s what they think Russian people like. You know what Russian people like, Dirk? Vodka. Svetlana took the food-in-the-ground opportunity to bring up polygamy, thus making her second only to Mama Fernando in my heart. Josh’s parents insisted that Mormons don’t practice polygamy anymore, although it bears noting that the television show they’re all appearing on immediately follows “Sister Wives.”

Kyle and Noon: Kyle and Noon find a Thai Buddhist temple in New Orleans, which is where they plan to get married. The temple is truly gorgeous. Good on you, Kyle! After the wedding venue tour, the couple swung by Cafe Du Monde and Noon reveals that her parents can’t come to the wedding “because of Visa.” Why would they need a Visa to come to the wedding? We can travel to Thailand on vacation, why can’t they come here? Unless she was referring to the credit card, I do not understand. Help me out in the comments, geniuses! Anyway, Noon sweetly noted that since her folks couldn’t come to the wedding, hopefully Kyle’s family would attend. With that, Kyle gets a shifty yet terrified look in his eye and says he doesn’t want to talk about it. “Some things changed” with his mom and he hasn’t talked to her for 10 years. He hasn’t talked to his dad in 5 years. Kyle and Noon seem to be navigating this relationship the best they can, so this revelation was a bit heart-breaking to watch. According to next week’s preview, we meet the mom who is basically an extra from Deliverance.

Loren and Alexei: Loren has backed off forcing Alexei to model. And also she’d appreciate it if he said ‘I love you’ first. That’s all we got from these two this week which is FINE BY ME.

Devar and Melanie: Melanie is totally out of money and has to pay for her $1400 wedding reception. Along with her girlfriends and mom, she went to pick out a reasonably priced wedding dress anyway. This segment was uneventful, mainly due to the regrettable lack of Margarita Bev.

Next week is a two-hour special starting at 9pm. Hopefully all two hours are devoted to Mama Fernando. Oh, and also Eve and I want to give a special shout-out to Em and Sophie in Chicago who sent us this picture of the door of their dorm room. We love you ladies! Until next week, my 90 day friends, may all of your commercial breaks be brief. 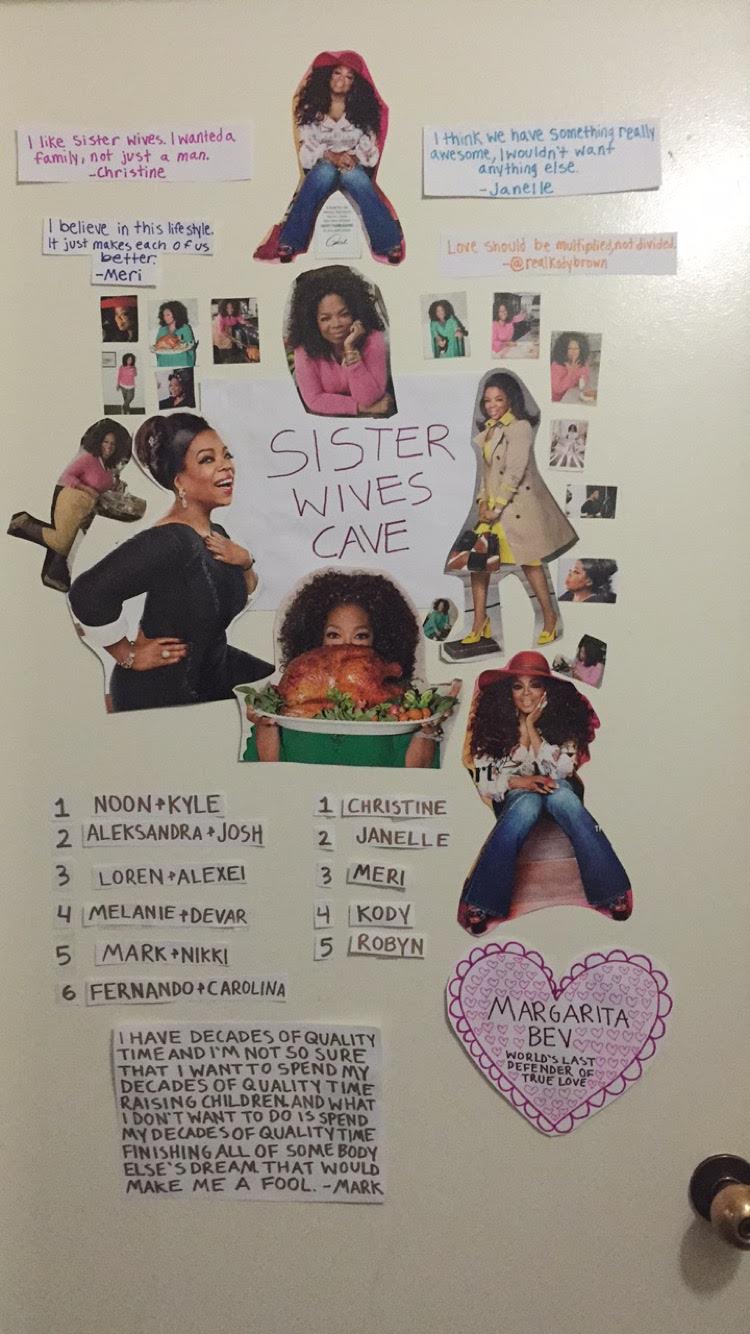 The only reason I would EVER consider being 20 again is to hang out with these SPECIMENS.