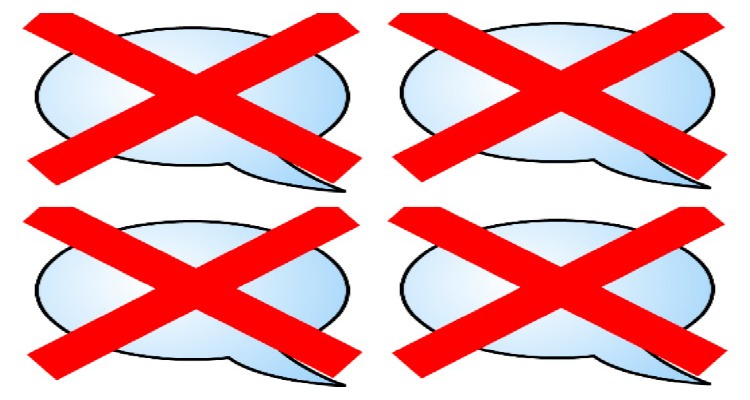 Image: An adaptation of the logo of @AvoidComments, one of the greatest twitter accounts ever.

You might think that your Slow News Day editrices have led smooth, painless lives from their easy, breezy cover girl facades. But that is not so! We’ve been down many dark roads and have found our ways out. Let us help you find yours (or at least, commiserate), by sending us your problems at editrices@yourslownewsday.com.

I’m a new contributor at a popular website, and I’m starting to get really demoralized. Since I started there, the hate comments aren’t stopping (I stopped reading them Friday, don’t worry. My boyfriend is reading them, though, and is getting all ragey).

I’m seriously convinced it’s all from their previous editor, especially because it’s really weird specific stuff, like saying that “[REDACTED]’s vacation has gone on long enough,” or that I just reposted another article from months before, even though what I wrote was an updated piece. Another was so nitpicky as to call out the ONE typo I had.

I’m to the point where I’m wondering, if I stay with this site, if I should just come up with a pseudonym or something for masthead/byline. I have never ever ever had such vehement, consistent, and anonymous comments day in and day out on what I write. Even the douchiest shit on [NATIONAL WEBSITE KNOWN FOR HORRIBLE COMMENTERS] was all from people connected via Facebook.

Now I’m working on trying not to feel panicky when i even notice that there are comments. Like, not even reading them, just the number itself. It’s really bothering me, though. Does it get better?

Beth: We should make a video. It DOES get better! But it took me way too long to learn that anonymous and nasty internet comments are 1. complete bullshit and 2. not indicative of the majority of the readers’ reactions. After 8 years of writing online and opening myself up to personal attacks of all insane kinds, I have found solace in the universality of the nasty comment. Everyone gets them. My hero David Sedaris gets them. That’s usually enough for me to say, “Oh, these people don’t know what they’re talking about.” When a comment really gets under my skin or seems particularly mean, I’ll check out the commenter’s other “work” and it usually involves commenting on like, every article ever posted. These commenters regard it as their responsibility to chime in on everything from a sports report to an obituary, usually at 3am on Thanksgiving. And they speak with such firm confidence, as if their anonymous opinion on someone else’s work is fact. In rare instances, I’ve contacted or communicated with a commenter. Recently, someone who guessed the tone of my piece before reading it, called me out on Twitter and told me to check my spelling and grammar if I wanted to be a writer. I responded, and asked what was spelled wrong. Nothing was (unusual for me!) and they apologized.

It wasn’t nearly as satisfying as you’d imagine.

Eve’s husband once promised me that if I ever met any of these people in person, they’d kiss my ass. HE WAS RIGHT. Seriously. I’ve met people who called me dumb, ugly, fat, untalented, and obnoxious. Then I will figure out who they are (because that is how the internet works) and end up meeting them. More often than not, they get wide-eyed and say, “You are SO funny!”

Do not let comments stop or edit anything you want to write, ever. These people were not hired to write. You were. Do not respond to comments, unless there’s a dispute over a fact. You don’t need to respond. You get to say what you want and have it published in a major publication, with your real name attached to it. Because you’re good at what you do. And if anonymous internet commenter was any good at it, they’d be doing it too. You’re bigger than the comments section. You’re on stage. They’re in the audience. You are French Laundry. And they are an Yelp review. I’m not saying I am the French Laundry of blogging, but I am saying you are.

Finally, the joy I get from writing outweighs the anxiety I get from seeing a shit-ton of comments and knowing that I shouldn’t read them. I read them anyway, because I’m an insecure human with a blog. Duh. I’m also kinda good at this, no matter what BrdgTnl415 states with immense confidence and disdain. Unless BrdgTnl415 is really David Sedaris, in which case I will quit right now.

Eve: Look, I know that all this is easier said than done — while I was looking for images for this post, I got a cruel AND mistaken comment and spent two or three minutes of my life looking at the guy on Facebook, reading his resume, and mulling his destruction.

Now I’m two or three minutes closer to death, and for what? Because I wanted to know why this person with what appears to be terminally poor reading comprehension chose to attack something I wrote on the basis of something I did not actually write, and to slam my choice of careers, ethics, and reputation in the process? Why did I just page through the Facebook photos of the kind of person who would do such a thing?

Here’s a funny story: the first day I returned to SFist, a site that I, mind you, was one of the FOUNDING WRITERS OF, a commenter wrote something that basically said (I’m paraphrasing, because I’m not going to get even closer to death looking that remark up) that if SFist was going to hire inexperienced, amateurish, idiotic writers like whoever the moron who wrote this is, then she’s never coming back to the site.

So, the funny part of this is that due to a glitch in the back-end, my full name wasn’t appearing on my posts (probably because my user account had been shuttered since 2006). That’s why I think it’s unlikely that this commenter, who I recognized as the wife of one of my husband’s friends, knew she was talking shit about me.

Clicking through on her Disqus profile, as Beth mentioned she also does above, I saw that she had left a trail of destruction in her wake, on sites both big and small. To me, this was kind of like that part of the movie where the wife realizes that her wonderful husband who takes frequent business trips is actually a serial killer. Beneath this woman’s smiling face, I thought, is a monster.

So I sent her am email thanking her for her comment and her direct feedback, and telling her I was looking forward to seeing her at an (already scheduled) upcoming social event. I never got a response to that email, nor did she show at the shindig. Whoopsie.

Why do I tell you this story? Because, I suspect, that in many cases, commenters don’t see us as people, and writers whose work is commented on eventually reciprocate that sentiment. And that’s really a shame, because I do think that reasonable discussions about mistakes or disagreements get lost when we can’t acknowledge one anothers’ humanity.

So, when I get a shitty comment, I try really hard to think about what it must be like to have the kind of life where you feel compelled to attack people, often with shocking aggression, for the crime of trying to write something that others might enjoy. I consider what terrible pain folks must be in to take the time to sign in to a commenting platform so they can type that they find something someone else wrote uninteresting or “not news.” I mull how small, tragic, and boring the life of someone who apparently feels that they HAVE TO question my career choice, even as they apparently have nothing better to do than to increase the pageviews of the site for which I write.

I ponder all those things. I hope that something in their lives changes, so they no longer feel they have to live this way. And than I close the tab.