If you are a smart person in America, you are watching Downton Abbey because it is the most important piece of artwork to ever emerge from humanity. Currently in Season 4, the PBS-aired show is back to it’s first season glory. I, for one, am focused on one particular story line which I would like to discuss. This post contains spoilers, for those of you who DVR Downton like it’s a common sitcom and not evidence of true genius.

Anna was raped! This happened several episodes ago, the perpetrator being the valet of a frequent guest of Downton and potential post-Matthew suitor for Lady Mary. I would like to ask Downton creator Jullian Fellowes to please drop all other story lines until this whole rape thing is resolved and our hero, John Bates, kills the valet, free of consequences, after a flawlessly worded lecture. 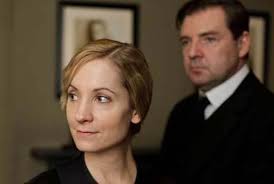 Because I have so much to say about this story line, and this is the internet, I will offer my concerns and observations about Anna’s Rape (AR) in bullet points:

– There’s been criticism that Fellowes included AR in an effort to boost ratings, and that this storyline doesn’t fit with the show at all. Hello? A maid was never raped in a country manor in England? Please. I’m sure it happened all the time. This is historically relevant.

-Why is no one calling the cops? Initially, only Anna, the rapist, and Mrs. Hughes knew about AR. But then Mrs. Hughes told Mr. Bates AND Lady Mary. The only one having a reaction I approve of to any of this is Bates, who is being kind and loving towards Anna while plotting murder. Obviously. Lady Mary is like, “Well, that’s too bad.” And Mrs. Hughes is doing her best with what she has to work with.

-Mrs. Hughes confronted the rapist, who said, “Oh yes, Anna and I got a bit drunk.” If you heard screaming, sirens, and gunshots around the time this was aired, my apologies. I threw coffee tables books through my living room windows in frustration.

-When is Mr. Bates going to kill the valet? How long can we drag this on? I know Anna will never fully recover from AR, but the level of anxiety this storyline is giving me is interrupting my usual anxiety over my money, my weight, and my relationship drama.

In other Downton news, do you think Edith will have her baby? Why is her boyfriend missing in Germany? And will Thomas find a boyfriend on his trip to America? I am bored with any Branson-based storyline, although the evil nanny was pretty amazing. Who saw that one coming! And finally, is O’Brien gone forever? I could not stand her, but now I miss that crazy lady’s maid and her conniving ways.

If there are any other television shows you would like to discuss, please let me know. I’m currently watching Downton, Real Housewives of Beverly Hills, The Following, 90 Day Finace, Wahlburgers, Girls, and Sherlock. I’m happy to add anything to my rotation on request.

Until next time, may your commercial breaks be brief…