Four years ago, I was very, very concerned about the mysterious deaths of three women in the North Bay Area. Two disappeared while walking on beaches in Point Reyes National Seahore, 1 hour north of San Francisco, another was found dead in Cazadero Creek, further north but also along Pacific Coast Highway 1. Rogue waves were blamed for the Pt. Reyes deaths, and there was no explanation for the creek body. I wrote a piece about this for the SF Appeal and along with SFist’s Brock Keeling, made a video of our visits to the Pt. Reyes beaches, complete with scary smooth jazz background music.

I continued to write about this, received several emails containing additional clues, concerns, and observations, and a phone call from a private investigator who was curious why I thought that these deaths might be the work of a serial killer. So I made a map. 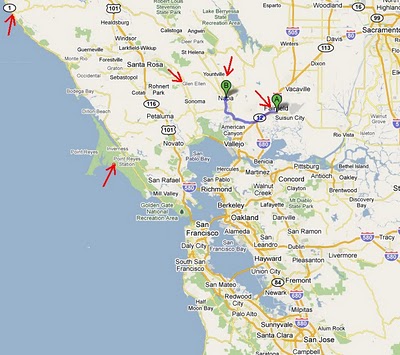 Map containing locations of missing women in Pt. Reyes, dead woman in Cazadero Creek, and another dead woman in Fairfield, all from Jan-May 2010.

This month, in April of 2014, two women were found dead on Mount Tamalpais. As we discussed four years ago, these deaths are eerily reminiscent of the work of the “Trailside Killer”, David Carpenter. Friend of SND Christine Bronstein did a moving piece for the Huffington Post on these most recent deaths, and her concerns about hiking on the mountain.

Robert Graysmith (Jake Gyllenhaal in “Zodiac”) wrote a great book about the Trailside Killer. You should DEFINITELY READ IT AND DISCUSS IT WITH ME.

This past week, I received the following email:

Beth,
I stumbled across your blog after our Easter dinner conversation turned to serial killers and whether the missing women from Pt. Reyes tie into the 2 hikers found dead on Mt. Tam. I’m wondering if you’ve heard about the two women who were recently found dead, apparently of “falls” on Tam. Both of them were found in drainage areas and currently they’re saying the deaths are not connected and that no foul play was involved. One of the women was found in Fern Creek which is apparently where David Carpenter also killed one of his victims. Of course (like many), I find this too coincidental. I live up here on the mountain and am very concerned about who might be roaming around the trails. I was surprised to learn of the women who went missing in Pt. Reyes and I don’t recall their disappearance. I guess I’m reaching out as I’m curious to know what you think and if there is anything that can be done?
Thank you!

Lady, I am ALL OVER THIS.

Both recent deaths on Mount Tam have thus far been determined to be accidents, falls into drainage ditches by women hiking alone. That may very well be the case. Forgetting the mysterious (?) deaths in 2010, let’s just look at the Mt. Tam deaths of this month.

1. People rarely die on Mt. Tam (unless they kill themselves, which tragically happens occasionally.) Two women accidentally dying in the span of two weeks is A LOT.

2. Falling down a mountain in the Spring is not necessarily fatal. What exactly did they die from? Did they die instantly?

3. Are the local authorities, for whom I have the utmost respect, exploring the idea of homicide? Are they considering the deaths from 2010? Do I watch too many episodes of Forensic Files?

We will continue to follow this closely here at Slow News Day. Seriously. Eve and I talk about this daily. Please join us.