Forensic Files, a true crime show about actual cases solved with forensic science, is on both HLN and CNN pretty much all the time. Sometimes it’s on both channels at the same time because it is THAT important that we see how mid-western cold cases were solved in the 1990s. If you’re anything like me, you tend to get sucked into a Forensic Files marathon on cold and stormy nights when you’re home alone. Or on perfectly sunny Saturdays when you have other plans. OMG Forensic Files, I love you.

Anyway, watchers of the show are intensely familiar with the ever-present haunting and confident voice of the narrator. As they say in show business, Thomas totally “sells it” every single time. He never misses a beat. So I looked up Peter Thomas, the voice of Forensic Files. Get ready to have your heart warmed.

Peter Thomas is currently 89 years old and lives in Naples, Florida. According to Wikipedia, “With the onset of World War II, he left The Stony Brook School and volunteered for the United States Army in 1943, after being offered an Armed Forces Radio deferment, and served with the First Infantry Division in five major campaigns, including the Battle of Normandy and the Battle of the Bulge. He was issued a Battle star for each of the five campaigns. He was also awarded the Bronze Star, the Purple Heart, the Unit French Croix de guerre, and Belgian Fourragère.” 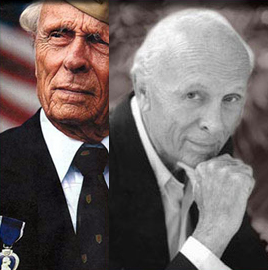 What! The Forensic Files narrator is an American hero! Can’t you just picture him in his little sound booth recording all the scripts for the Forensic Files, where criminals offer their shoddy excuses for patricide (Father’s Day was the theme all this weekend), and Peter Thomas is probably like, “I stormed the beaches at Normandy, jackass!” If that were my biography, I’d start every conversation that way.

Wikipedia goes on. “Thomas has received many awards for his work about cites, as one of his best, the Oscar won by a documentary he narrated, One Survivor Remembers. The film, produced by HBO, chronicles the personal experience of Gerda Weissman Klein, who was interred at the Nordhausen Concentration Camp when she was a teenager. Thomas’ unit participated in the haunting liberation of Nordhausen.”

He married his high-school sweetheart Stella in 1946, his father performed the ceremony, they have 3 kids, and Stella died ON FRIDAY. (I honestly had no idea. I’d been meaning to write this post since Friday evening.) Peter Thomas is also the voice of “NOVA” on PBS and numerous other documentaries, TV shows, and commercials. Most recently, his voice was in a Cool-Whip commercial.

If I may quote the Forensic Files website, “Next time you hear Peter on our show – listen to his delivery carefully. He’s the Babe Ruth of the business. There is no one better.”