I have not seen the Cartoon Network’s television show, “Black Jesus.” In fact, I haven’t even heard of it. But I just received a press release from the “American Family Association entitled, “Offensive and Blasphemous ‘Black Jesus’ Debuts on Cartoon Network.” For obviously reasons, I opened the email instead of instantly deleting it. 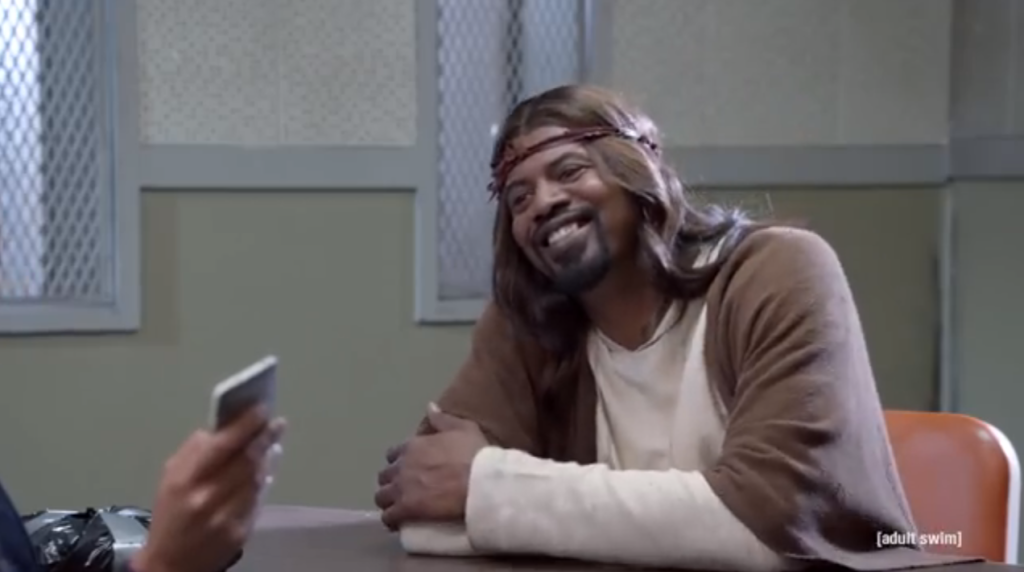 Screenshot from “Black Jesus” on the Cartoon Network

Black Jesus is a cartoon airing at 11pm on Thursdays (thanks American Family Association. Let me just set my DVR…) and portrays a weed-smoking black Jesus. The press release, which is somehow called a “News Release”, begins with the dateline Tupelo, Mississippi. Tupelo, Mississippi always sounded like the kind of place that soldiers would be from in World War II.

(Takes a bite out of an apple) “Tupelo, Mississippi.”

Anyway, this “news” release is pretty predictable, including quotes form offended people, examples of blasphemy seen in “Black Jesus”, and a list of advertisers offended parties should boycott. But the best line, perhaps ever sent over the internet anywhere, is this tragic example of this terrorizing show: “Jesus tells people he died for their mother-f***ing souls, to which they reply that his sacrifice was old news.”

I am Catholic and Eve is Jewish, we both have a lot of respect for faith, but that shit is funny, American Family Association.

“‘I still love your b—- a–! By default, fool!’ Jesus tells John Witherspoon, who plays a cantankerous homeless man so in need of a shower that dust literally puffs off of him when Jesus embraces him wholeheartedly. Witherspoon’s character, however, is put out that Jesus won’t give him winning lottery numbers.”

Oh my GOD, I am so watching this.

Other things the American Family Association has a fucking problem with:

Girls Inc., a non-profit focused on giving confidence to girls is, “a pro-abortion, pro-lesbian advocacy group.”

Ford Motors, because they gave money to LGBT rights groups. Macy’s for, similarly, sponsoring “sex parades.” McDonalds for having an employee serve on the board of the national LGBT Chamber of Commerce, Hallmark for selling same-sex marriage cards… I sense a theme, AMA!

The American Family Association would like you to thank and support The Hobby Lobby, however, because of something about sex. It’s always about sex with them.