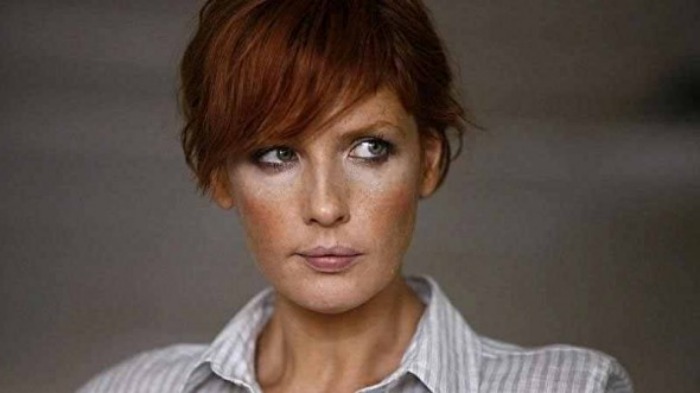 I only watched the pilot of ABC’s drama Black Box when forming my opinions below. But frankly, I’d rather be behind on The Americans than be caught up on Black Box

The pilot to Black Box feels like if the producers of Spiderman 3 tried to adapt the seminal living-with-bipolar-for-creative-types book, Touched With Fire and ended up with something that feels one part House, one part unfunny Children’s Hospital, and one part “Siri, search bipolar disorder symptoms.”

Black Box fits snugly into the ‘great at vocation, awful at personal life’ show model as hot-shot, renowned, and brilliant neuroscientist Catherine Black (Kelly Reilly), head of the Neurological Institute of America hides her bi-polar disorder, a secret that threatens to emerge when she goes off her medications and is manifested by having steamy network friendly sex with strangers and by interpretive dancing in public places. (Dancing to explain mood a la Spiderman 3.) Also, she takes hot, steaming dumps all over her personal life while in a manic state!

The opening scene between Black and her therapist, Dr. Helen Hartramph (Vanessa Redgrave, c’mon yall) pulls triple duty as laying thematic groundwork for the series (being exceptional or dead), flashback to Black in a manic state while accepting an award at some neuroscience conference, complete with random sex with her driver and an hallucination transposing Van Gogh’s Starry Night over the SF Skyline as she thinks she is flying through the city, and a who’s-who’s sampler of DID YOU KNOW FAMOUS AND INFLUENTIAL PEOPLE ALSO HAD THIS DISORDER? Vincent Van Gogh! Sylvia Plath! Billie Holiday! All my bi-polar heroes are dead and died awfully!

Aside from her therapist, the only people that know about Black’s bipolar disorder is her older brother Josh (David Chisum) who with his wife Regan (Laura Fraser) is secretly raising Black’s teenage daughter Esme as their own. Later in the pilot, Black’s boyfriend Will Van Renseller (David Ajala) learns about the disorder when pressuring her regarding her reluctance to get married. (Spoiler: Catherine and Josh’s mother was bipolar and killed herself when they were kids.)

Judging by the severity of Black’s manic episodes and the time that passes during the pilot (I can only guess less than a week passes during the pilot) Black suffers from type-1, rapid cycling bipolar disorder, characterized by the euphoria, delusional thinking, rapid speech, arousal (which the show seems to put a LOT OF focus on). And from the way Black Box portrays the symptoms, it feels like they got a production assistant to grab a pamphlet about bipolar disorder (the one next to one about HPV) from a student clinic, and proceeded to shoot b-roll around each symptom, checking it off a to-do list.

From a narrative standpoint, we only see Black vacillate between her manic and normal states for much of the pilot, and she only slips into a depressive episode into the final act, as demonstrated by her unkempt hair and sweatpants (the universal symbol of giving up). This only serves to undercut the depressive part of manic depression (making it look more like a plot device, than you know, something people live with) and makes it look more like NBC’s unfortunate Do No Harm.

I’d be remiss not to mention Black Box’s pervasive jazz porn-horn, Duke Silver-esqe score, but if jazz is about the notes you don’t play, Black Box must be about the medications you don’t take. Flailing about in public seems to be the only reliable way the director of photography has been able to demonstrate Black (aside from sexy dresses) is in a manic state. If anything, I am more offended at the underlying message that the only time a “sane” person would ever dance in the street is when during a manic episode. Hey, maybe I just left a really great first coffee date with a girl and wanted to dance to !!! on Divisadero. Hey, maybe I just like dancing in public.

As long as we’re talking about me, I’ve got a case of bipolar II disorder, which is characterized with hypomania, a less severe version of full blown mania (without the more overt red flag behavior). What does it feel like? Frankly, it feels like my head is getting head. And my brain becomes a perpetual feel-good machine that’s on a mission to make everybody I run into feel good about themselves. I feel like I am in my own one-man Busby Berkeley dance sequence of infinite beauty distilled by every deliberate move I make and an appreciation for the world, as every tweet I tweet is gold, every smile I give is radiant, and I’m a not-so-reluctant sex symbol conductor of a train that’s going nonstop to TRILL CITY (all caps, population all of us) where the music (and my heart) swells all the time and every speech is motivational. But deep down, I know, this is all done with the implicit agreement that I am tap dancing over a trap door, and one of these days that trap door is going to let out.

The appeal for manic states is most certainly there, and that’s why bipolar disorder was considered by some to be an evolutionary advantage and, some argue, why it still exists in folks today. So when we wrap up our own identity based in some evolutionary advantage outside of our own control, it’s hard not to want to let go, or worse, think we are DEFINED by our mental chillness. So when that trap door does let out and I’m left feeling like every life choice I made has contributed to this rot of a life I am experiencing, where every single molecule is screaming, and that if I was really bipolar, I’d at least have something, anything to show for it, and not this ashy taste in my mouth.

(See what I meant about identifying so much with the disorder? Hell, I even wrote an entire solo show about it, called Bi-Poseur for god’s sake)

Black demonstrates stubbornness with not wanting to be NORMAL, MAN, contending that if the great geniuses she mentioned in the opening (WHO ALL DIED AWFULLY BY THE WAY) were medicated they’d all live lives of boring mediocrity. She’s like doing Super Important Work ™ along with them, essentially summing up her stance as TURN DOWN FOR WHAT. Which doesn’t feel so much like an earned character beat, but rather plot contrivance. “I’m just trying to be me, y’all!”

In the final minutes, after alienating her secret daughter after another manic episode (where she swung on lampposts and harangued teenagers of color), Black, pushed to the brink of Virginia Woolf-ing it all, phones Dr. Hartramph and is only talked down from the edge (of the beach) with shlockey platitudes about how YOUR WORK IS WAITING. Ego successfully appealed to, Black decides not to end it all and returns to her work. Instead of exercising a new found sense of empathy or compassion with herself, she instead gives a shit-eating monologue to a now cured teenager COTW about how the brain is the black box (I see what you did there. From one hundred yards away).

It would have been incredibly more powerful if Black actually publicly came out as bipolar to the Neurological Institute of America. Remember how at the end of the Scandal pilot Fitz totally just got up in Olivia Pope and everyone was just like WHAAAT? (I know Scandal is its own thing, but still.) Not only would future episodes have to deal with the fallout from this decision to come out (which the end of pilots need to do anyway, set up grist for future episodes), but shit, it might have scored a couple of positive points in my stigma/representation scale. Instead we see Black and her boyfriend reconcile and her boyfriend admits that he has his own dark secrets, and he may or may not have liked being sexually assaulted by Black while in a manic state. Meanwhile, Black is still hiding she is bipolar to the rest of the world, fetishizing the disorder and how people view mental health. Wait, what?

So how do I feel about Black Box’s portrayal of mental illness and bipolar disorder? Is it the same kind of minstrelsy (ugh) critics of the Big Bang Theory decry with its portrayal of nerd culture? No, hell no, and don’t every compare Big Bang Theory to minstrelsy. It’s unfortunate, sure, but Black Box had way more going against it than how it portrayed mental illness, and it doesn’t matter because it will probably be gone in less than six episodes anyway.

We did get a cringe worthy teachable moment disguised as expository sequence (“IT’S LIKE DIABETES”) that ought to be punctuated by the NBC’s “The More You Know” star (also NBC should sue if ABC did that). At worst? It’s worth a chuckle, in the same way you laugh at dogs who wear clothes and they think they’re people (Hey look Black Box thinks it has fully formed characters, how adorable!) Goes without saying, but we need character that goes beyond the ‘great at vocation-awful at personal life’ dichotomy model. But hell, that just sounds like basic writing for narrative.

Lately, I’ve been pushed into figuring out more about how my own brain works, and maybe by knowing more about it, I can better take control of my own mental health, a Batman of mental wellness, if you would. So I will say I do appreciate Black being a neuroscientist, and the whole trying to find strength in our own weakness thing. (Also I like the way ‘limbic system’ rolls off my tongue.) And yeah, I’m trying to manage it on the day-to-day with individual and group therapy. Meditation. Trying to eat right. Working out. Which isn’t sexy at all when portrayed onscreen. And it is easier on some days than others. But I know the alternative, and it’s me being detained by the cops waiting for the ambulance to come take me away to the psych ward, while the EMT asks me why would I waste a perfectly good Playstation controller (to hang myself with, duh) on the drive over to Herrick Hospital in Berkeley.

I’m more concerned about things like Guy Fieri’s tenuous grasp on Flavortown, if the next season of the Walking Dead will actually be the first that’s legitimately good, and trying to develop psychokinetic powers via meditation/flotation tanks.