Real Housewives of New Jersey stars SINCE SEASON ONE Teresa and Joe Giudice are both going to prison. I have been waiting months for the sentencing hearing. I literally had it on my iCalendar, I am so shocked and fascinated by the turn of events that led Tre and Juicy Joe up the river.

For those of you who refuse to watch RHONJ, the Giudices (pronounced either Joo-dice or Joo-Deech-ay, depending on which dead relative we’re listening to) have been defrauding the government for over a decade. They have four daughters, the oldest being 13, and both Teresa and Joe have to serve time. Neither seem like financial masterminds, so I don’t really understand how all this is possible, but from the looks of it, Joe was involved in various stupid nefarious acts and needed his spouses signature on tax documents. Tre just signed because she is a busy mom of four and proprietor of several nonsense businesses. She does not have time to read tax documents. Anyway, in the world of Bravo TV’s “The Real Housewives”, this is bigger news than the time Taylor’s husband hung himself.

(Yes. This is all on television.)

For those of you who’ve been watching this whole fiasco, here are my questions, concerns, and comments; 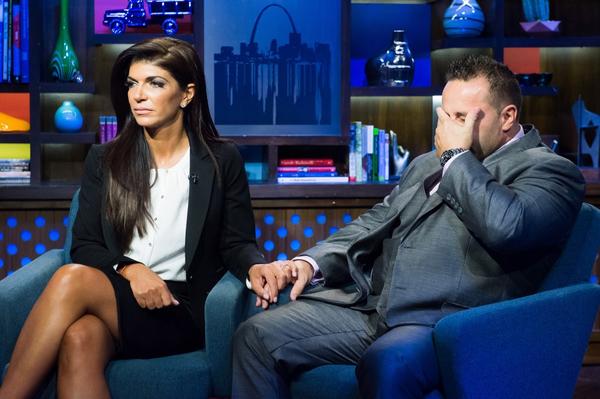 1. Don’t these crimes, ranging from lying about income to obtaining fake identification, seem really stupid? How would Joe think he could get away with this? My limited understanding of taxes is that I enter all the money on my 10-99s into Turbo Tax, I guess at how much I spend on insurance and work expenses, and I pay what the little red number in the corner says to. (Side-note, I’m fully self-employed for the first time ever this year, and am convinced I will do something wrong when I do my taxes on April 14th, and end up in jail, hopefully in the same pod as Teresa.) What I’m saying is, I don’t get how you lie about how much money you make to the feds. And I REALLY don’t get how I don’t know how to do this, but Joe Giudice does.

2. Teresa either plays dumb, or is dumb. But listing the total value of her jewelry as $0 goes past, “Oh, I don’t know. I just let my lawyer fill it out. (Blank stare.)” Just say $1,000! A thousand dollars is believable.

3. Related to #2, how did she not understand that her plea deal could result in jail time. Sure, maybe lawyers fed her fantasies about “probably” and “unlikely” but she’s claiming she had no idea prison time was even a possibility. If anyone said to me, “You MIGHT do some time” I’d definitely remember it. And then I’d over-estimate how much my jewelry was worth, just to be safe.

4. No one appears to be addressing any of this with the daughters, several of whom are clearly on to their parents getting sent up the river. Joe recently revealed that the 8-year old asked, “Do you have something to tell me?” and Joe was like, “Uh, no.”

5. Teresa is going first, on Jan.5th and has to serve 15 months while Joe takes care of the kids. Then Joe goes in for 3 and a half years. How long to they get to be together after Tre gets out? Is this normal to stagger parental prison time? Can Joe take care of children? Why are Joe and Tre refusing any help from Melissa and Joe Gorga? Can Amber and Jim go to prison instead, please?

6. Do you really think they are actually going to jail? Because I still cannot believe this. Apparently Tre is shopping around for a new lawyer and hoping to get her sentence overturned, but the details of her plea agreement state that she has to accept the sentence. I’m just amazed that TERESA GIUDICE IS GOING TO LEGIT PRISON. As she told Andy in a suddenly soft and understated voice, “I’ll just wear my hair back.”

7. Joe will thrive in prison and fit right in. I imagine Joe in prison to be like the prison scenes from Goodfellas. But Teresa in prison? I just can’t see it. I am really trying to picture Tre in the cafeteria, Tre trying to talk to people, Tre trying to figure out the rules and claiming ignorance. Truly, honestly, this will not go well. I really feel for her, because I think I could survive prison better than Teresa could. And I’ll probably be able to tell you all about it because now I’m all worried about paying 2014 taxes again.

*Buzzfeed’s Kate Arthur did an amazing look into what the fuck happened to Teresa. It’s well-written and really interesting. Check it out.