Like you, I have so many things to say about last night’s Oscar Telecast, I hardly know where to begin. If my thoughts seem out of order, I apologize. At least I’ll have my shit more together than John Travolta.

Let’s begin with the red carpet: I hate to give it to them, but E!’s red carpet coverage was 10 times better than the shit-show over at ABC. I think ABC hired like, my dad to interview celebrities. “So, you’re in the pictures?!?” E! still sucks however, devoting way too much time to a remote studio of reality show cast members who are now fashion experts. Explain to me how appearing on Laguna Fucking Beach qualifies someone to comment on the art of fashion. Because I have a fucking bachelor’s degree in fashion design, and I AM NOT ON E! 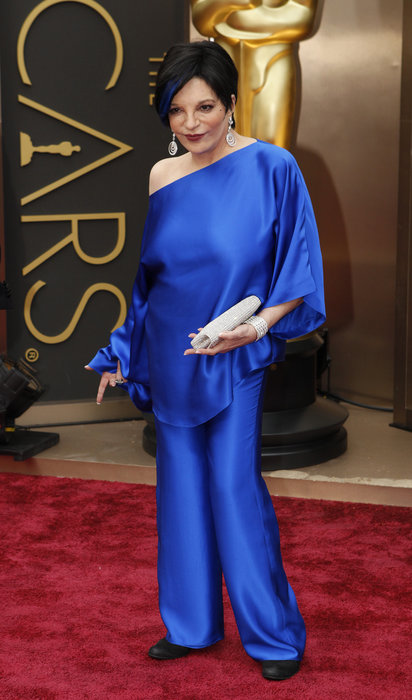 Since I am such a goddamn expert, my favorite Oscar gowns of the evening were both of Bette Midler’s dresses. Bette Midler looks fantastic. Straight men were texting me during the Oscars, “Bette Midler looks great.” That’s how awesomely she is holding up. The same cannot be said for Liza Minelli, but we’ll get back to her. Winners: Jennifer Lawrence, Lupita Nyong’o, Amy Adams (although we did not like her hair), Sandra Bullock, and Matthew McConaughey’s wife.

Fashion losers? Whoopi Goldberg, who’s ensemble was basically a big middle finger to the world. And Anna Kendrick looked surprisingly horrible. She was photographed standing next to Precious, who comparatively looked amazing.

My viewing party of six found it awkward that celebrities stood around awkwardly waiting to be interviewed by lesser celebrities. Although it did provide Jared Leto with a fabulous, humanizing moment when he approached Ryan Seacrest at the same time as 84-year old nominee June Squibb. Said Jordan Catalano, “The rumors are true. We are together.” Yay! Ombre hair has a sense of humor!

On to the show, I thought Ellen did a great job hosting. Sure, there were some awkward moments, but as hosting gigs go, I suspect the Oscars is a tough one. What would be the toughest hosting gig of them all, I wonder? A NAMBLA convention? A televised execution? Highlights of Ellen’s hosting include her famous selfie. At first, I was horrified that Lupita’s brother photo bombed the celebrity-only selfie by seeming to be under the impression that everyone was welcome to be in a selfie with Ellen. NO. But then, after MUCH discussion, I conceded that his enthusiasm was endearing. Also, my brother pointed out that if I took him to the Oscars, he’d do the same thing. Check out photos from the back of the selfie. OMG, Liza. NO. Stop.

Speaking of Liza, did you see her reaction when P!nk sang “Somewhere Over The Rainbow”? Liza’s mom, Judy Garland sang the original 254 years ago, so I can understand why Lucille Two would have some ownership of the song. But she could AT LEAST CLAP.

Did anyone else notice that the screenwriter who won for “12 Years A Slave” didn’t acknowledge the director Steve McQueen, both on his walk to the podium and his speech. Rude.

John Travolta famously mispronounced Idina Menzel’s name, which is kind of hard name, but THIS IS THE OSCARS JOHN TRAVOLTA. More importantly, how is no one saying to him, “Um, Mr. Travolta? Your hair looks fucking ridiculous.” Imagine the team of people it takes to glue on his bizarre plastic hair. Think of how much money he has and how shitty his hair looks. Imagine him sitting there making chit chat while a team of people who have signed confidentiality agreements affix springs of hair to his forehead. Think of the awkwardness! Think of how much fame it takes to think this is okay! Think of how classy bald Bruce Willis looks!

My favorite part of any Oscars is a celebration of the deceased; the In Memoriam section. Introduced by Glenn Close wearing Lizzie Borden’s original killing dress, this year’s In Memoriam was everything I’d hoped for, and more. And then, after the gripping montage of the dead, Bette Midler emerged in a flawless gown and SOLD “Wind Beneath My Wings.” She even FLAPPED HER ARMS LIKE WINGS. FOR DEAD CELEBRITIES. All I can say to that is God Bless America.

That said, I needed more RIP Philip Seymour Hoffman. The whole ceremony should have been about him. Nary a mention in a speech!

It was nice to see Bill Murray, who looked dead himself, say something nice about Harold Ramis, considering they’ve had a 21-year feud. But you know, maybe not wait till someone is dead to resolve things. 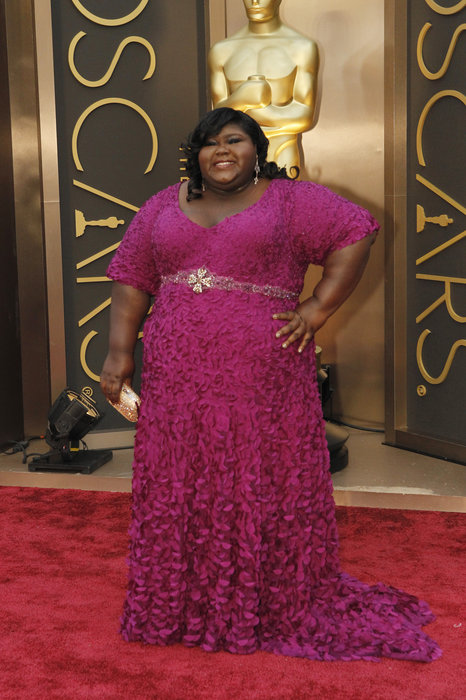 I love Gaborney, but I would have lost the belt and put my hair up. (Photo: www.oscars.go.com)

Matthew McConaughey, God Bless Him, is really growing on me. He was so sweet presenting with Kim Novak, who was roused from what appeared to be an opium haze. Kim needed several swift pats to the back to rejoin us at the Oscars, and I was worried that every time Matthew shook her awake, one of her face pieces would fall off. Also, he seemed genuinely happy throughout the entire production. So when McConaughey won, I was thrilled. Leonardo DiCaprio, however, was visibly crestfallen. Actually, all of the Best Actor nominees looked like they honestly thought they would win. Each of them really wanted it. Sorry Christian Bale, you still need to karmically pay for THIS.

Anne Hathaway is literally the most unbearable person on Earth. I was trying to put my finger on just why I justifiably hate Anne Hathaway so much. She’s just so ACTRESS-Y. She clutches her chest when she sees Meryl Streep. She pauses, she takes a deep breath. She beams while sighing “Meryl… to be in your presence is a gift.” Okay, alright. Enough.

Speaking of Okay, Alright, Enough. I’ve had just about enough of Kevin Spacey’s confidence. He starts his presenting with his “House of Cards” voice, he tries to take over Ellen’s pizza bit… My brother Alex was annoyed with me for being annoyed with Kevin Spacey. “You think he’s too theatrical. He’s an actor!”

There’s something too, “Let me give the people what they want; more of me” about Keyser Soze.

Were you reading the live tweets during the Oscars. My cousin Kate got mad at me for tweeting too much, but she is not one of us. I got so into the tweeting, I actually responded to Donald Trump, who was being a little bitch. Everything he says is sheer nonsense, but HOW DARE HE DISPARAGE BETTE MIDLER.

I’ve gone on long enough. Give me your thoughts, your favorite moments! Did the real winners win? And most importantly, who do we hate. Comment it up, film lovers!