As a big fan of the mani-pedi, I haven’t gotten fake nails since a terrifying foray into “gel tips” as a dorky teenager. I proudly maintain healthy, natural and classic fingers and toes – finances permitting. But sometimes, I have neither the time not an extra $50 to blow on nonsense nails.

So I’m standing in Target looking at nail polish, when my eyes graze over towards the fake nails. It’s been a solid 20 years since I even glanced in the faux direction, but something was calling to me – female intuition, perhaps. I noted several trendy options, like neon colors and bedazzled ring-finger options. I slid a box off it’s little hanger and read the back. As I did, I noticed several women of all walks of life come by and grab a box of fake nails. More ladies were going for fake nails than polish or files.

A well-dressed woman with a kid in a shopping cart brushed past me to grab the French tips. I looked at her inquisitively. She locked eyes with me and said, “Oh yes.”

With that magical and life-changing revelation, she was off. I selected a box of “Kiss” French tips which you can buy here. The box comes with 28 nails of different sizes and a little glue tube. Apparently it helps if you buff your nails first, which I did. Then I put glue on a fake nail, glue on a real nail, pressed ’em together and counted to 5. I did both hands in seven minutes. They looked amazing and felt rock solid.

For the past nine (9) days, I’ve gotten nothing but compliments, other than Cousin Kate who said, “Nice Real Housewife nails.” THANK YOU KATE! The package says nails last around 7 days, and only now am I beginning to see a little loosening around the cuticle area. Apparently soaking them in nail polish remover makes the nails fall off. I can’t report on getting them off yet – which if I recall, was a doozy.

I will say that the last time I pressed on a fake, drugstore nail circa 1991, it was wobbling off after a day. These babies that I’ve got on now are clicking and clacking on my keyboard, having been repeatedly showered, washed, and soaked. They’ve done dishes and laundry, played with kids, written newspaper articles. These nails are amazing – and still feel as attached as they did over a week ago. More importantly, they make me feel put together and feminine and fabulous.

Now you know my nails are fake. I could not keep what is clearly a well-kept and vital beauty secret to myself. Let the judgmental chips fall where they may. 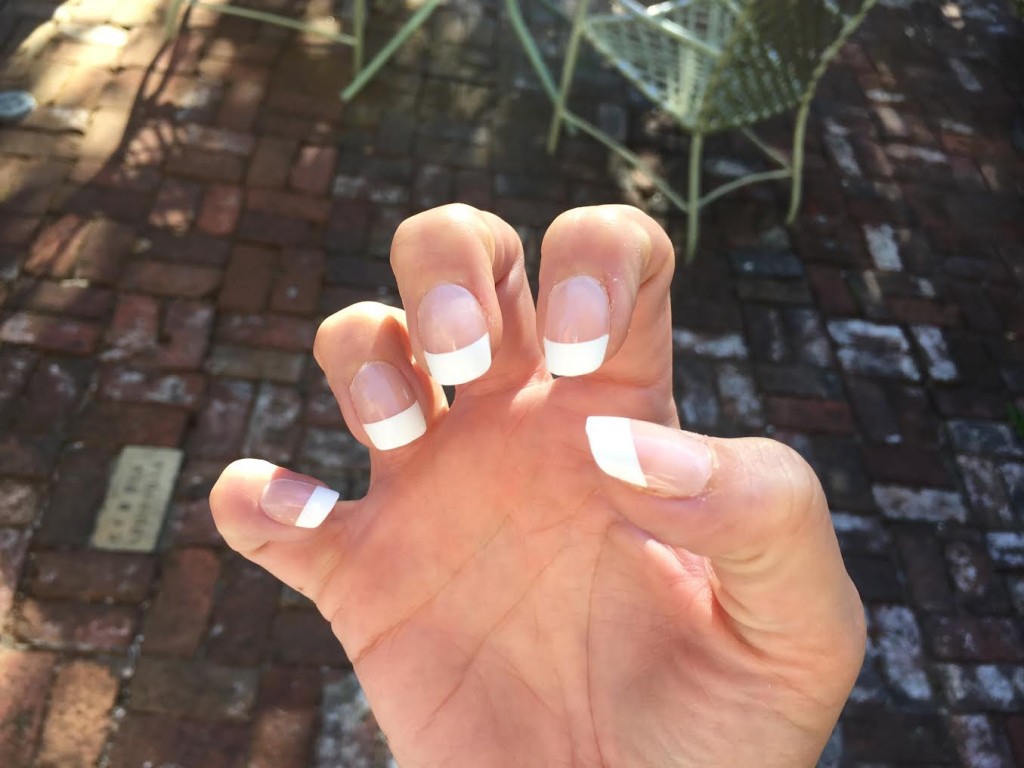 These babies are nine days old.