It’s taken 12 hours to get the sound of Danielle’s wailing out of the depths of my ear canals. I had to listen to the entire 46-song “Hamilton” soundtrack twice just to free my brain of her agonizing bawling. 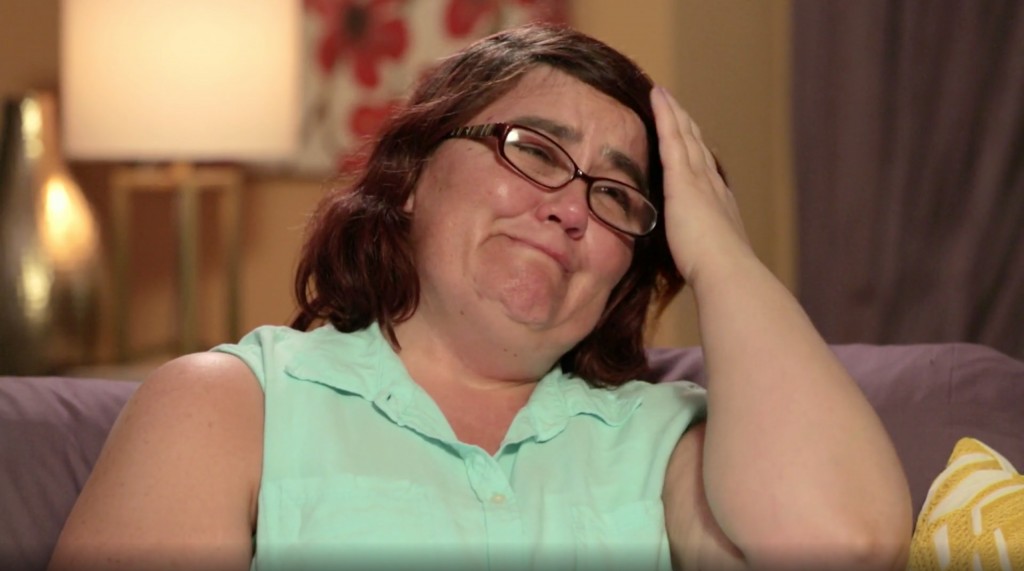 The definition of insanity is doing the same thing over and over again and expecting a different result.

Last week, Dani stormed out of pizza time because Mohamed wasn’t listening to her feelings. She still wanted to file for annulment, which would probably result in Mo getting sent back to Tunis, Tunisia. (I like saying Tunis, Tunisia.) As a result, Mo has summoned Dani and her car air freshener to his and Tom’s palatial farmhouse for a mediation. Tom, you see, not only hangs around Walmart making friends but he is also some sort of Sandusky, OH therapist.

Tom also keeps a dog in a teeny tiny cage placed next to a magnet-covered fridge. I’m no animal activist, but that cage situation seems pretty fucked up. Animal people, please explain.

So Dani and Mo quickly dissolve into screaming and yelling about the same old shit. Who ruined whose life? Who lied? Who wanted a green card? Tom comes and SITS IN BETWEEN THEM and offers some rational thoughts. Mo doesn’t want to hurt Dani, Dani doesn’t want to hurt Mo. So pull the annulment and file for divorce.

I agree with this. I know a bunch of you want Mohamed deported. Why? Who cares? Unless you are a Native American, your family immigrated to this country just like mine did. Getting a divorce allows Dani to stop obsessing about Mohamed every fucking day of her life and move on. An annulment is revenge-based. It’s about punishing Mohamed, and it will never ever make her feel better. You GUYS. Revenge doesn’t work they way you want it too. If there’s really a karmic imbalance, the universe will work it out. Trust.

Anyway, Dani agrees to “pull the annulment.” She even goes so far as to give Mohamed a ride to the courthouse so he can see this with his own eyes. And en route to the courthouse, Mohamed basically starts egging on Danielle. As my fiancé kept yelling at the television, “Oh my God, shut up. She’s doing what you want. Be nice to her!”

Even when they get to the courthouse, Mo asks where he should park and Dani is all sad voice, “I don’t know.” Mo gets mad, because all Dani ever says is “I don’t know.” This is true and it’s annoying. But STFU until that divorce get stamped, Mohamed. We are not allowed in the courthouse but apparently Dani “pulls” the annulment. She does not, however, file for divorce. Why file for divorce when you can drag this thing out for another two years?

Throughout the whole episode (which includes other couples that I do not care about), Danielle crumbles into a sea of tears and awkward sobs that require actual subtitles. Mohamed meets Dani for one last goodbye before he heads to Miami. It’s actually a pretty classy move on Mo’s part. He thanks her for pulling the annulment and says he’d like to be friends – the official “Don’t call me” send off of every failed relationship. Dani latches on to this. Friends! Yes! We’ll be friends and he’ll realize he’s in love with me! Mohamed simply requests that Dani stop all of her dramatic tactics and cries for help. She agrees through the shoulder section of her Old Navy fleece.

Mohamed departs the seventh layer of hell and this should be the end of things, right? Wrong!

According to previews, Dani immediately proceeds to call and text Mohamed relentlessly. She then gets in a tropical ensemble, gets on an airplane and flies to Miami. WHY DANIELLE? WHY? Imagine if you got fired from a job and kept showing up, demanding your old job back, harassing everyone at your old office, and calling the front desk non-stop. For years! This whole Jbali Jdrama has been doing on for literal years after Mohamed has explained that their marriage is over.

In next week’s preview, Mohamed threatens to get a restraining order. I honestly think that’s probably the right call at this point. Her harassment is abusive (in volume if not content) and thus worthy of a legal divorce. Any type of deportation proceedings will just look like exactly what they are – the desperate revenge tactics of an unwell woman. A court of law will tell Danielle to stay the hell away from Mohamed and release him into the lower 48 with best wishes and a bright green card.

I know you have shit to say, my 90 Day Friends. Don’t forget to read our recaps of the regular season of 90DF over on Previously.TV, and until next time, may all of your commercial breaks be brief.