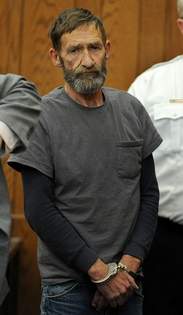 I remember watching a television show about how people spend their lottery winnings, and of course spent the entirety of the show thinking I could spend that money better. After all, I do not need to purchase a dozen bounce houses and use the rest for bail money. But really, it’s usually such a delight to see a lottery winner in action, going nuts on their new dune buggy or whatever. Somehow I assumed that a lottery winner would be so grateful for the windfall, they’d cease and desist all horrific activity.

Mais non. “According to testimony in court, a 16-year-old boy told police that when he was between 10 and 14 years old, (Daniel) Snay forced him to participate in sexual acts and showed him pornographic videos. The alleged crimes occurred in Snay’s camper that he parked in Uxbridge, according to court testimony.”

My only explanation is that once a creep, always a creep…