DListed’s Hot Slut of the Day (HSOTD) was recently “The Flamin’ Hot Cheetos Burrito from Taco John’s!” and the photo and decription have left me with more questions than answers. 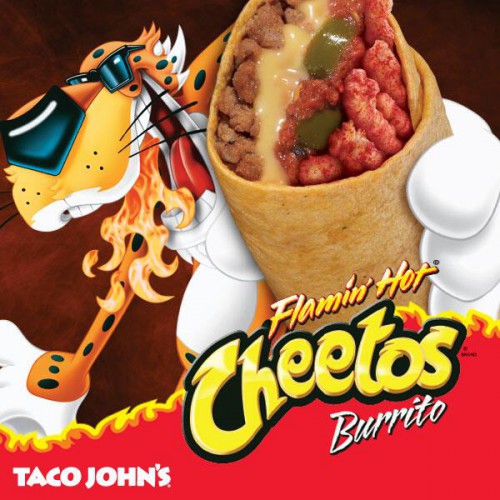 For example, who the hell is Taco John? Is he related to Papa John? Is this John hitting every ethnic food with his chain, like Trader Joe’s does adorably?

According to DListed, which is my number one news source, Taco John’s is the Taco Bell of Wisconsin. And now they’re putting Cheetos in a burrito in the apparent hopes that people near death will cash out the last of their savings from between the couch cushions and buy 23 of them for a light lunch. Count me in, Taco John!

Maybe it’s something special in Wisconsin, but I have never heard of this “chile de arbor salsa”, nor am I sure of what constitutes a fiery tortilla. None the less, “I’ve simply® got to try it®!” Said Beth Spotswood® of Slow News Day®, which is a website® on the internet®.

The nearest Taco John’s is in Reno, Nevada (of COURSE.) I have a car that seats 5. Who’s in?