The other night I said to my friend Mo, “Oh, I like that necklace.”

“Thanks!” Mo said, pulling the gold chain foreword to show me the green and orange stones. “This is jade from human sacrifices.”

Mo went on to explain that her husband’s great-great-great-grandfather used to dive (underwater or into volcanos, I did not ask) and retrieve jewelry from human sacrifices in Mexico. Apparently, natives to the area were none too thrilled with these dives, as one might argue this is grave-robbing. Some of the stones Gramps saved for his family, and a hundred years later, Mo ended up with 5 pieces of rustic jade around a gold chain. You’ve got to admit, that’s a cool response to, “I like your necklace.” 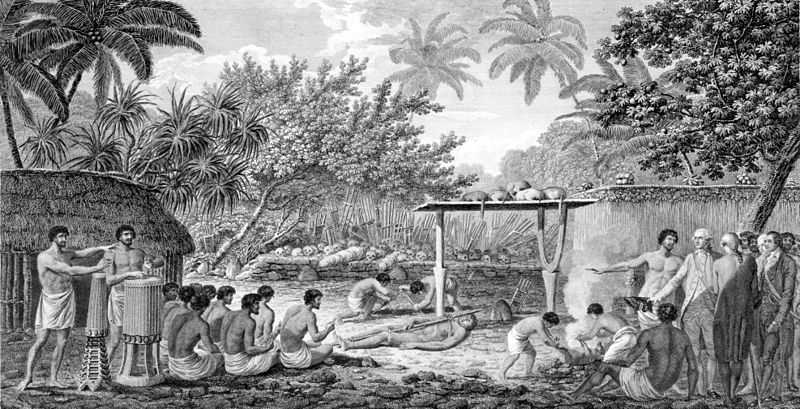 Immediately, I came home and googled, “human sacrifice.” I’ve been on this Wikipedia page for days now, and its led me in so many directions, I don’t know where to begin. I will simply recap the most interesting cases:

Wife-strangling in Fiji: Once I read the phrase “wife-strangling” it was straight back to Google for more details on this. Check out this article, which details wife-strangling and has a pretty upsetting story about it. Basically, as is a theme in human sacrifice, a MAN needs a companion in the afterlife. Should the wife die first, she’s on her own, I think.

Heart removal: I know, I know. This was used in the Mayan sacrifices for hundreds of years. I will not cut and paste the details which are horrible and fascinating. You can read them here.

“Retainers“: Lots and lots of important people in ancient cultures all over the world had their servants, slaves, mistresses, and sometimes even high-ranking officials killed for the important person’s funeral, so they could have all the help they needed in the afterlife. I keep wondering if human sacrifices went willingly, but by the looks of this drawing, that was not the case. It’s a funeral procession of an important man, and the folks tied up around him are his “retainers”, waiting to be killed to join him. Can you imagine what was going through their minds? Were they accepting? Angry? Plotting last-minute escape?

Lest you think all human sacrifice occurred long before any of us graced this Earth, there’s a whole section on modern day cases. In March, 2010, a 26-year-old laborer in Bangladesh was killed by fellow workers on the orders of the owners after a fortune teller suggested that a human sacrifice would yield highly-prized red bricks. Bricks! Or then this horrific example, “On June 2005, a report by BBC revealed that boys from Africa were being trafficked to UK for human sacrifice. It noted that children were beaten and murdered after being labelled as witches by pastors.” Here’s the link.

Other Wikipedia pages that have also creeped me the fuck out: Seppuku (harakiri), and Self-Immolation.

Don’t worry. I have therapy on Thursdays.