After switching to AT&T Uverse, my television life has completely transformed. The amount of channels now available to me at a shockingly reasonable cost is, quite frankly, what our forefathers dreamed of when coming up with the televised miracle that is America.

There is a channel called “CRIME + INVESTIGATION.” I know. Take a second. Compose yourself. It’s…pretty exciting. The Crime + Investigation Network (CIN, or sin) features exclusively true crime television shows that have appeared on A&E networks. Yes, this includes Lifetime. Classics abound, including American Justice and Investigative Reports. And then there’s new shows that I’d never heard of before. Lately, I’ve been hooked on “Vanished with Beth Holloway.” 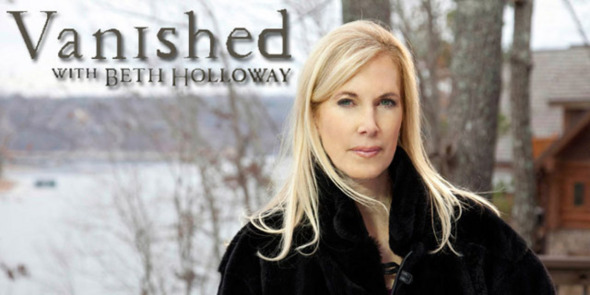 Beth Holloway is Natalee Holloway’s mother, who is twice divorced and rumored to be dating JonBenet Ramsey’s dad. (GASP) Natalee disappeared in Aruba in 2005, and if you’ll recall, made international news due to White Woman Missing Syndrome. Sadly, Natalee has never been found, and now her mother hosts a television show in which she cries with parents of other missing kids, and kinda, sorta tries to find them. (She never does.)

Beth Holloway is surprisingly likable, or lovable if you’re John Ramsey, and does an awesome job of getting the families of the vanished to cry on camera and reveal the gory details of their pain. Nothing ever really gets resolved on the show, so basically we’re just voyeurs of personal tragedy. My main take-away is to never go to Aruba.

“Vanished” appears to have been cancelled on Lifetime, and now lives on in reruns on CIN, thank God.