An Indiana woman (Eve’s home state, folks) left her dead husband in the living room for over 9 months, coming and going and having people over to sit on her porch. USA Today has the sick scoop on Gerald Francis “Scooter” Gavan who was 88-years old and has been dead since July 2013. Or so the authorities claim. Mrs. Gavan, his wife of A MERE TWO YEARS claims he’s only been dead for 5 days, but decomposed super fast because they house was fitted with dehumidifiers for Scooters woodworking projects.

Yeah. Sure. That’s the ticket. 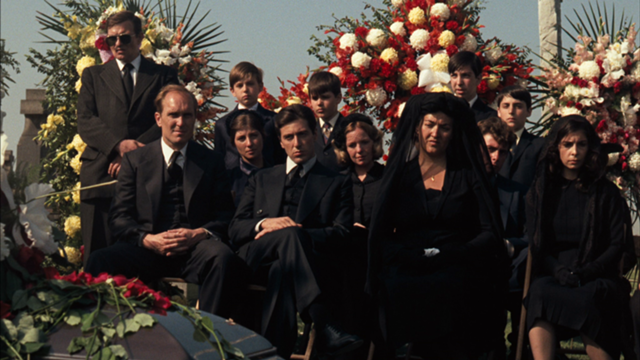 Screenshot from the Godfather II. Duh.

Mr. Gavan’s wife, who neighbors thought was his caretaker, is named Ila Solomon. Her quotes in this article are priceless and not suspicious at all:

Solomon said a foul odor forced her to sleep in the house she owns next door during the five days she claims Gavan lay dead on the living room floor. She declined to disclose why she didn’t report the man’s death to authorities, citing instructions from police detectives.

She said everything she’s done has been rooted in a deep love for Gavan, whom she married two years ago.

“I love Scooter,” Solomon said. “There’s nothing I wouldn’t do for him.”

That’s why, she said, she’s been trying to get his remains transported to a “body ranch” in Texas, where researchers study vultures feeding on human bodies.

Solomon said Gavan told her he wanted to experience a tradition he heard about in India in which bodies are put on a hillside for birds to eat. In his death, he wanted to get “a bird’s-eye view,” she said.

Can’t you just picture some woman on her porch in Indiana trying to explain this, and with all confidence and pride in her use of the phrase, claims her dead husband wanted to “get a bird’s-eye-view.”

Let me break this one down for the 5-0; Scooter died in July and she’s been collecting his money. Case closed. What’s next?