We all agree that jail is interesting. But there are so many prison shows, there is little need to invest time into another one – UNTIL NOW. Yeah guys, I’m talking about “60 Days In” on A&E.

60DI (our new 90DF) takes place at Clark County Jail, in Jefferson, Indiana. Seven volunteers of various likability are placed in the GENERAL POPULATION of an actual jail for two whole months. They are videotaped the whole time and can never tell anyone – for obvious reasons – that they’re not really (alleged) criminals. The premise sounds dumb, but trust me when I tell you that this is “The Real World: Jail” and it is highly watchable after episode one, which just explains everything over and over again.

Theoretically, the show is happening because corrupt Clark County is open to constrictive criticism, but this seems insanely dangerous. I kinda want to do it. Apparently if a fake inmate gets really scared, they’re supposed to say, “I really miss good coffee” and they will be rescued. LOVE THAT.

The fake inmates ARE: 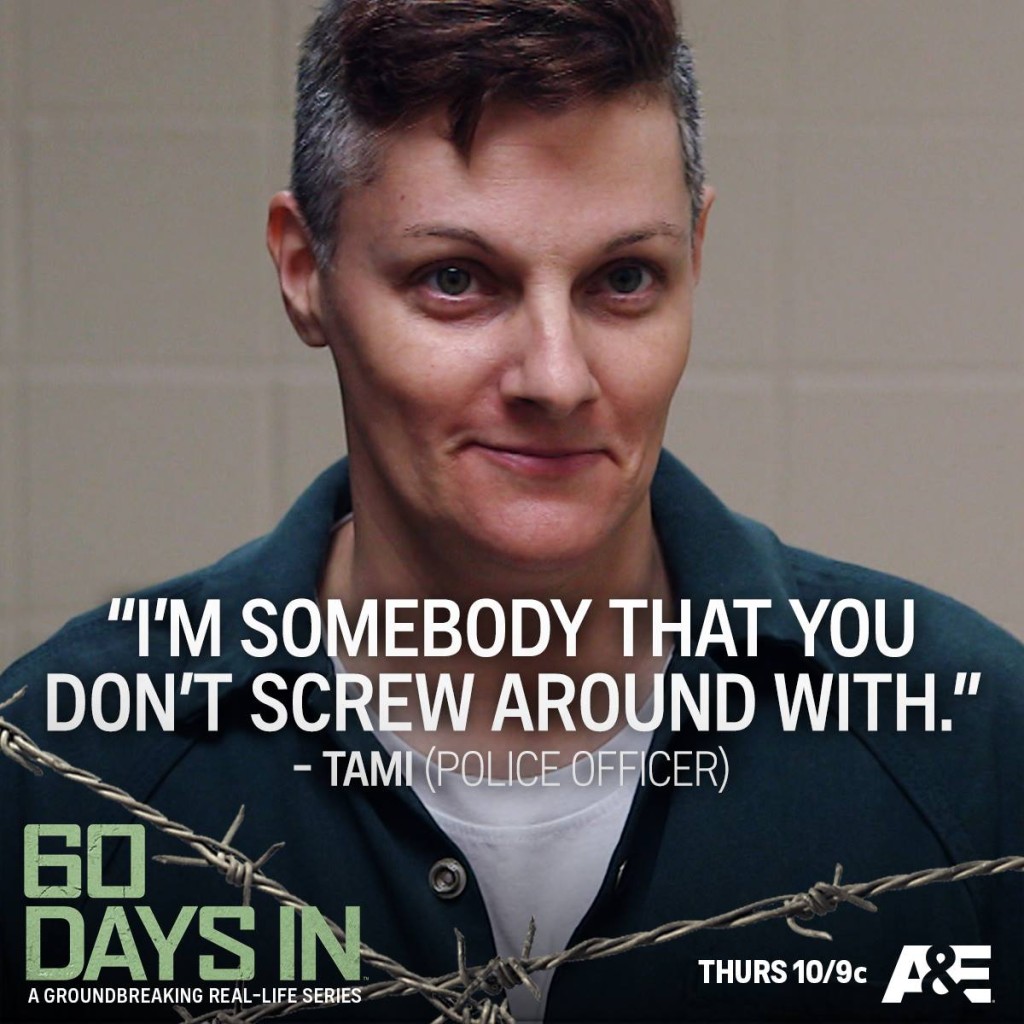 Tami: Tami is a petite butch lesbian cop and awesome. We love Tami and she is smart, normal, and kind. She is married and has a daughter.

Zac: Zac is an attractive former Marine who is thus far, handling himself really well. Four episodes in and Zac is the cool kid in the pod.

Robert: Robert is insane. He is a 45-year old teacher who has undiagnosed Asperger’s Syndrome and refuses to pick up on the social cues that even his fellow prisoners are desperately sending him. Robert thinks jail is a tax-payer funded country club and will probably die during Season One. He interrupted a bible study to discuss child molesters. The entirety of our viewing of 60DI will be focused on Robert. Robert is the Danielle/Mohamed of 60DI.

Maryum: Maryum is Mohamed Ali’s daughter and a social worker. She is the celebrity contestant, and so far she thinks jail smells weird.

Barbra: Barbra misspells her own name and is described as a “military wife” which I feel is supposed to imply something I’m not getting. Barbra shares Robert’s political leanings about criminal justice but right now she really misses good coffee.

Jeff: I don’t have a good read on Jeff yet. He’s a security guard who dreams of being a prison guard.

Isaiah: Isaiah is 19 years old and from West Philadelphia. His older brother is in jail and Isaiah is basically choosing to scare himself straight. I’m worried he’s too young for this.

You can catch up on five episodes online. (OMG. FIVE! I’ve only seen four.) I’ll start re-capping, either from five or six, so please catch up and we shall discuss. Until next time, my TV-watching friends, don’t get shived in the shower.