If you’d like to feel better about your looks and your attitude while remembering a time when the Olympics were the best reality show on television, you need to watch Nanette Bursteins’s “The Price of Gold“, an ESPN documentary about Tonya Harding which is now available on Netflix on Demand.

In case you’re too young/old/lame to remember, the early 90s brought us the most dramatic ice dancing class war in history when a white trash pile of bangs named Tonya Harding tried to take out her competition, the Vera Wang-clad teeth-on-skates named Nancy Kerrigan. Tonya claims this was all her husband’s doing. Her bangs tell a different story. ESPN just made a brilliant documentary about the whole thing and I watched it at 3am last night because I couldn’t sleep.

First thing’s first, Tonya Harding looks horrible these days. I mean, she looks really fucking terrible. She is also blunt, crass, and dumb. As she is described in the documentary, Tonya Harding is her own worst enemy. We’re supposed to feel bad for Tonya because her mom beat her and she married the creepiest man in Oregon when she was 19. As a result, Tonya is incapable of making the right decision. Ever. If you’re in a pinch, ask Tonya Harding what to do and then do the opposite.

Nancy Kerrigan, on the other hand, looks rich and that’s apparently why America loved her. Well that, and maybe because she didn’t go around beating people up. While Nancy Kerrigan wanted nothing to do with the doc, Tonya Harding’s “childhood friend” Sandra was ALL OVER IT, defending Tonya, revealing how she saw Tonya’s mom hit her, detailing in the most annoying way possible Tonya’s rag-tag struggle to the top. And then right at the very end of the film, Sanda totally throws Tonya under the bus and was like, “Oh yeah, she was totally in on it.”

Tonya Harding, you see, surrounds herself with horrible people. Tonya had this dreadful childhood friend, she married this mustache of a man who hired his disgusting sidekick as a bodyguard. Tonya could only afford to practice at a mall skating rink, and was thus surrounded by mall people. Tonya’s abusive mom made her hideous costumes. Everything Tonya touched turned to shit. The only decent person in Tonya’s life was her coach who is SHOCKINGLY normal.

Tonya herself put it best when she said of Kerrigan, “She is a princess and I am a pile of crap.”

So when Tonya’s husband orchestrated this stupid attack on Nancy Kerrigan, which was both creepy and poorly executed, Tonya Harding went from being the Roseanne of Olympic Ice Scating to being the Aileen Wournos. The drama around the 1994 Winter Olympics was gripping, Nancy Kerrigan still lost to an even-worse dressed competitor, and Tonya Harding took up professional boxing.

I promise you, you will love this documentary. I know House of Cards is back on Netflix, and TRUST ME, I am on it. But “The Price of Gold” makes this year’s 2014 Winter Olympics looks like a lesser episode of Antiques Roadshow: Sochi. 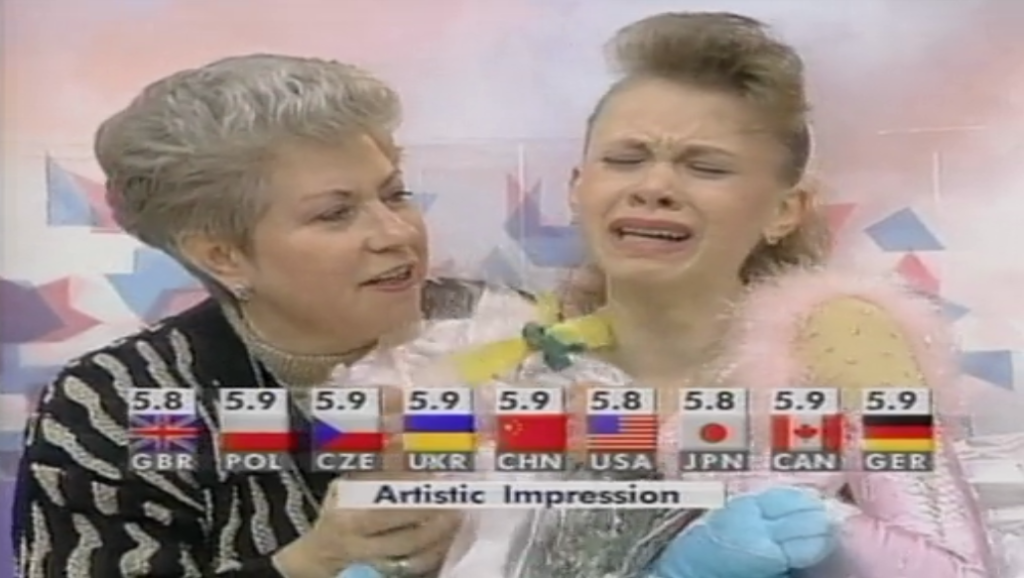