She was binging so hard, getting so invested in the characters, she called me. “Beth. I feel like they’re living with us.”

This is exactly how I feel about “Dog: Bounty Hunter.” 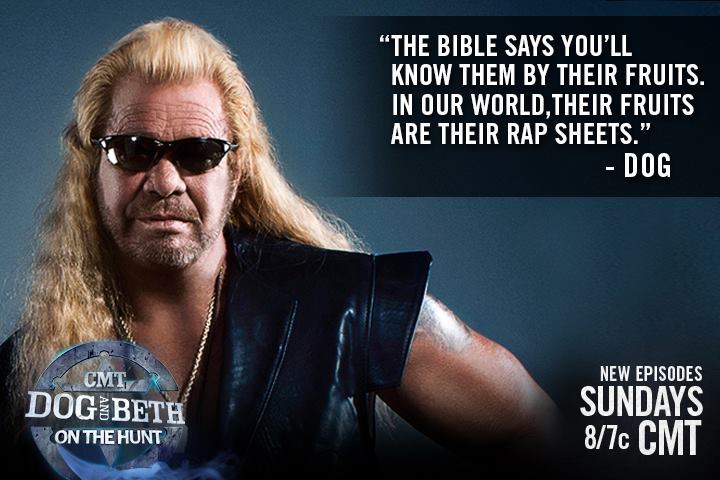 Out of everyone on any reality show ever, the people of Dog: Bounty Hunter are the most down-to-earth and unchanged by the cameras. For example, I am watching Dog right now, and Baby Lyssa (pronounced: Lisa) is getting married. Her rehearsal dinner was interrupted because Dog, his wife Beth, Dwayne Lee, Leland, and Baby Lisa had to go catch a criminal. The next day, at the beachside wedding, Dog dramatically walked Baby Lisa does the aisle and then gave her betrothed his Bounty Hunter Necklace Badge. “That badge changed a lot of lives. I gave it to my new son. Just like I gave him my baby.” CHILLS!

When Dog married Beth, you must understand, his daughter from a previous relationship (Katie Barbara) had died the day before. Baby Lyssa’s “something blue” was a Finding Nemo keychain flashlight that belonged to Katie Barbara. CHILLS!

As Bounty Hunters, they take their job really fucking seriously. Like, this is their job. If people want to film it year after year, fine. But they are bounty hunters before they are reality show stars. Right now, Dog is very publicly on the hunt for an MMA fighter who beat up his porn-star girlfriend. Sometimes, when Dog levels his pepper spray at a wanted criminal, he’ll recite a rhyme in the name of the crime’s victim. Beth cuts holes in her bounty hunter leather gloves so her long, manicured nails can breathe.

The staff (of Da Kine Bail Bonds) consists of children from previous relationships, many of whom have on-again, off-again relationships with Dog and Beth. The Chapman’s family life is sometimes just as dramatic as the lives of the people they take to jail. As a result, Dog and Beth aren’t that judgmental when they arrest people. No matter how bad the criminal, Dog and/or Beth will offer them a cigarette, and talk about turning their life around.

There is the show (now only in reruns) “Dog: Bounty Hunter” and now “Dog & Beth: On the Hunt.” They’re basically the exact same thing.

Here is Dog and Beth talking about sex on Chelsea Lately:

Here is the world’s best fan video, made for Dog’s son Duane Lee:

And really, this is why we watch: